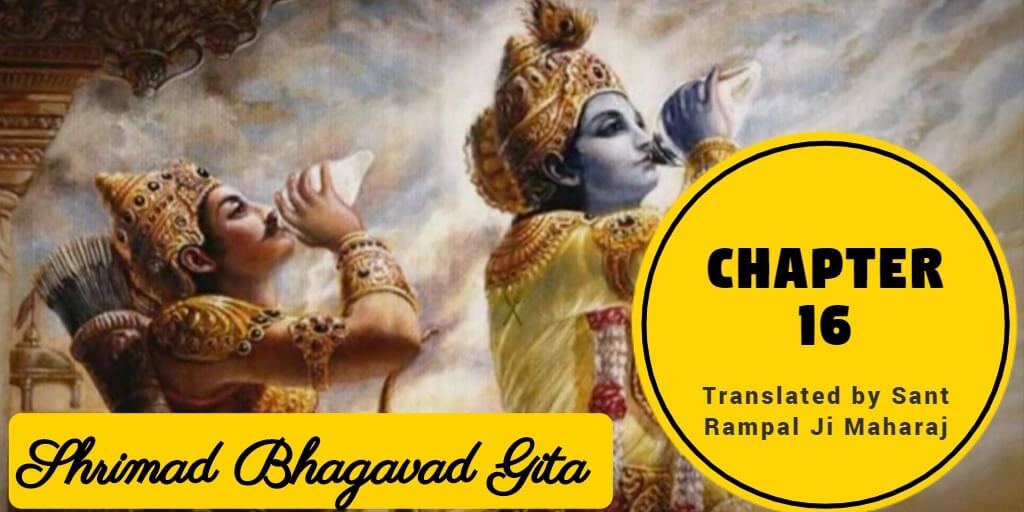 Important: In Bhagavad Gita Chapter 16 from Verse no. 1 to 3, the characteristics of those pious souls have been mentioned who, in previous births, used to do Brahm sadhna by Om naam according to the Vedas i.e. in accordance with the scriptures, or used to do bhakti of Purna Parmatma after obtaining it from a Tattavdarshi saint, and who could not get across (escape). When they again obtain a human birth, then they possess the following characteristics.

In Bhagavad Gita Chapter 16 Verse 1 to 3, God Brahm (Kaal) describes the divine nature (of noble souls). They are fearless, unhostile, observe religious practices, are soft-spoken, do not criticise anyone, they are not lascivious, angry, greedy and arrogant. They do not ask to get honoured by anyone. They are modest. Because they are doing bhakti since their previous births, that is why their nature is like that of godly men i.e. saints.

In Bhagavad Gita Chapter 16 Verse 4, it is described that those men who have hypocrisy, arrogance, anger, harshness and ignorance, they are of demoniac nature who have born with demoniac instincts i.e. those souls did not get the company of saints in their births. They, abandoning the ordinances of the scriptures, kept behaving arbitrarily i.e. kept worshipping other gods (Rajgun-Brahma, Satgun-Vishnu, Tamgun-Shiv, ghosts-pitras, Goddess and bhairavon etc). Even when they attain a human birth, then also they keep doing sadhna based on their previous temperament. As a result of which, they did not possess high opinions.

In Bhagavad Gita Chapter 16 Verse 5, it is stated that those people who have saintly nature, they are born for attaining liberation by doing bhakti. If one gets a Complete Saint Guru, then liberation is possible; if one does not get a Complete Guru (who gives Satnaam and Saarnaam) then by following incorrect way of worship, his life will go in vain. And those who are of demoniac nature, they do not do bhakti. Even when they do bhakti, it is opposite to the ordinances of the scriptures and is fraudulent based on lokved, along side continue to indulge in evil habits (consumption of tobacco, meat and alcohol); if they do not indulge in evil habits, then also remain firm in worship of other gods. If someone tries to guide them, then they become angry. They become bound in the bondage of inauspicious actions i.e. are entangled in the bondage of 84 lakh births. Arjun! You are born with saintly nature. Therefore, do not worry.

Bhagavad Gita Chapter 16 Verse 10: Those with demoniac nature, filled with hypocrisy, pride, arrogance, driven by insatiable desires, out of delusion acquire false principles, and wander about adopting corrupt behaviour. In Bhagavad Gita Chapter 16 Verse 11, it has been explained that this nature of those individuals with demoniac temperament does not even end after death. Obsessed with innumerable anxieties, who remain engrossed in worldly enjoyments, who are convinced that only this is happiness. In Bhagavad Gita Chapter 16 Verse 12, it is said that those with demoniac nature, whether they are called saints, whether their disciples or people who themselves perform baseless sadhna, are bound by hundreds of shackles of desires, overpowered by lust and anger strive to collect wealth by unjust means for indulging in sensual pleasures, and also do bhakti opposite to the ordinances of the scriptures.

The purport is that those with demoniac nature say, “Today I have acquired more money. I will do this, I will attain that, I have so much wealth, and in future I will have even more.”

The meaning of Bhagavad Gita Chapter 16 Verse 14 is that those men with demoniac disposition say, “Those enemies have been killed by me. I will also kill those other enemies. I am God. I am the Doer. I am perfect, powerful and happy.”

Bhagavad Gita Chapter 16 Verse 15, 16: Those with demoniac nature say that I am very wealthy and of a noble/great family. Who else is equal to me/ I will pwrform yagya, will do charity, and will rejoice. Thus, deluded by ignorance, with perplexed mind, entangles in the snare of delusion, excessively addicted to sensual enjoyments (the demoniac people) fall into deep impure hell.

The meaning of Bhagavad Gita Chapter 16 Verse 17 to 20 is that those who follow arbitrary way of worship which is opposite to the ordinances of scriptures {to worship the three gunas; Rajgun-Brahma, Satgun-Vishnu, Tamgun-Shiv, and other lower gods, to worship Pitras (to carry out shraadhs), ghosts (to offer oind, to perform terahveen-satarhveen [the thirteenth day and the seventeenth day after a death – when the last funeral rites are performed]), to collect ‘phool’, ashes of a cremated person, and to take to Ganga for scattering and performing last rites etc are religious practices opposite to the scriptures. Evidence is in holy Bhagavad Gita Chapter 7 Verse 12 to 18 and 20 to 23, and Bhagavad Gita Chapter 9 Verse 22 to 25.}, the sinners, self-conceited, who criticize each other, who violate my orders, who perform cruel deeds, the most degraded among men, I hurl them repeatedly into the wombs (births) of demons. Those fools, instead of attaining me i.e. instead of going into my great heaven (which is built in Brahm-lok), after enjoying the short-lived happiness in heaven etc go to a further lower state i.e. fall into deep hell. Related to this is mentioned in Gita adhayay 16 Verse 23-24 that he who, abandoning the ordinances of the scriptures, acts whimsically i.e. performs arbitrary way of worship, neither attains happiness, nor is his an task accomplished, and nor attains supreme salvation. Therefore, Arjun, scriptures are the only evidence for the religious practices which should be done and which should not be done in the path of bhakti. One should not accept the path of bhakti, which is against the scriptures, directed by any other particular type of person or saint-sage.

The purport of Bhagavad Gita Chapter 16 Verse 21, 22 is that lust, anger and greed - lead a living being to the gate of hell. Only those who are free from these can attain supreme salvation (complete liberation); otherwise not. Kabir Sahib also gives evidence –

In Bhagavad Gita Chapter 16 Verse 23, 24, it is stated that those who abandoning the ordinances of scriptures follow way of worship according to their whimsical desires {worship of the three gunas, Rajgun-Brahma, Satgun-Vishnu, Tamgun-Shiv, and other gods-goddesses, idol-worship, Pitra-worship, ghost-worship – to carry out shraadhs – offer pinds, worship of place of pilgrimage, circumambulation of Govardhan, to visit places of pilgrimage, to practice austerity, worship of peepal-jaanti, tulsi, jaap of naam without a guru, yagya, to give charity, goddess of Gurgaon, of Beri, of Calcutta, worship of Mata of Seenk Paathri, worship of tomb, Guga peer, baba of Johad (small lake), worship of a date (to keep fast of any type), worship of Baba Shyaam Ji and worship of Hanuman etc is known as ‘opposed to scriptures’.} neither can they become happy, nor attain liberation. Therefore Arjun, perform those actions which should be done according to the ordinances of the scriptures. For you, the scriptures are the only evidence. A wrong way of worship, instead of being beneficial, is harmful. Search for the Tattavdarshi Saint who instructs the true way which is in accordance with the injunctions of the scriptues. By doing bhakti only the Purna Parmatma, you will attain eternal peace, all the happiness and supreme salvation. (There is special evidence in Bhagavad Gita Chapter 18 Verse 62, Bhagavad Gita Chapter 15 Verse 1 to 4, and Bhagavad Gita Chapter 4 Verse 5.)