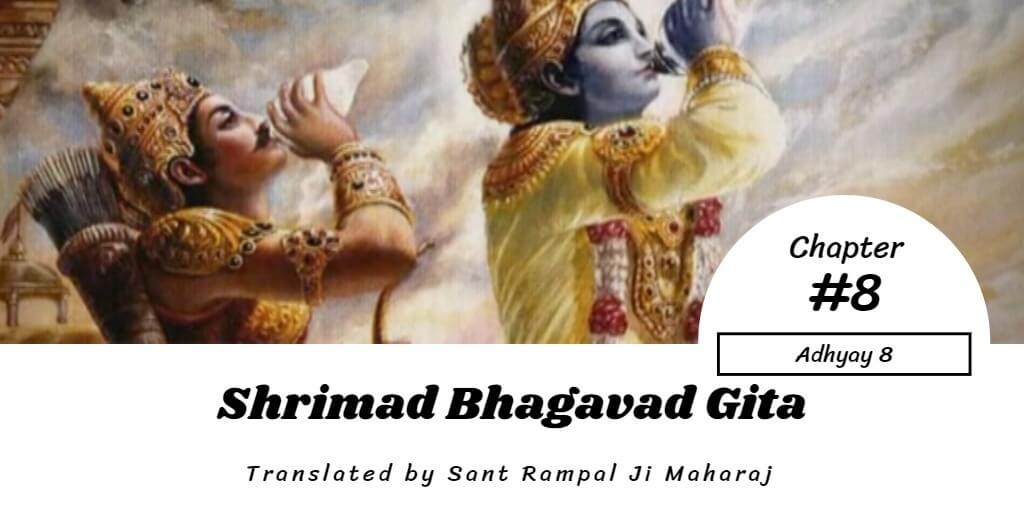 WHO IS THAT PURNA BRAHM? | Bhagavad Gita Chapter 8

Therefore it has been proved that that SatPurush has been called as the Purna Brahm. He only is Param Akshar Brahm.

In Bhagavad Gita Chapter 8 Verse 1, 2, Arjun questions that Oh God, what is that Brahm? What is said to Adhyatm – Adhibhoot – Adhidev and who is Adhiyagya? How is He known at the time of death?

It is clear in Bhagavad Gita Chapter 8 Verse 3 that in answer to what is that Brahm, God Kaal (Brahm) is saying that He is Param Akshar Brahm i.e. Purna Brahm (SatPurush). Because there are three Gods (Brahm).

Its evidence is also in Bhagavad Gita Chapter 15 Verse 16, 17. Like, Kshar Purush is perishable God and Akshar Purush is imperishable God, and in reality, Eternal (completely imperishable) God is someone else other than the two mentioned above, who is known as Completely Eternal God (Purna Avinashi Parmatma). He is Param Akshar Brahm i.e. Purna Parmatma (SatPurush). He only, by entering into the three worlds, nurtures and protects (sustains) everyone. In Bhagavad Gita Chapter 8 Verse 4, God is saying that I, Brahm, having the perishable nature, am the Adhibhoot, and ParBrahm (Akshar Purush) is Adhidev; the Supreme Purna Parmatma, Param Akshar Brahm present in this body of the embodied beings is Himself Adhiyagya i.e. is situated in all the yagyas. Bhagavad Gita Chapter 9 Verse 4, 5 and Bhagavad Gita Chapter 7 Verse 12, prove that Brahm (Kaal) is saying that I am not present in all the living beings.

Bhagavad Gita Chapter 9 Verse 4, 5 prove that Brahm (Kaal) is stating that I am not present in the living beings. With steady mind (mat-yaji), becoming a scripture-based worshipper (he who does bhakti according to the prescriptions of the scriptures), bow before me (great me), thus engrossed in scripture-based sadhna from the inner-self (matparayan), you will come to me.

In Bhagavad Gita Chapter 8 Verse 6, has said that this is a rule that whomever, a devotee remembers (does sumiran of) at the time of death, he goes to that only. In Bhagavad Gita Chapter 8 Verse 5 and 7, Kaal God is saying that he, who remembers me in the final moments, comes to me (Kaal) i.e. Kaal eats him after roasting on the tapatshila (the hot rock). Whomever one remembers in the last moments to that only he goes. Therefore do my sumiran (remember me) and you will come to me. In Bhagavad Gita Chapter 8 Verse 8 to 10, has said that oh Arjun! A devotee who wants complete liberation, he without engaging his mind in anyone else, only remembers (does sumiran of) one Param Divya Purush / Supreme Divine God (Purna Parmatma – SatPurush). He goes to Him only. He who remembers (Kavim) KavirDev (Sarvagya) who is Omniscient; (Sanatan) Primeval God; (Niyanta) who controls everyone; who is subtler than the subtlest, who sustains everyone; composed (Peaceful Purna Brahm); self-effulgent like the sun (Swaprakashit); beyond ignorance, the Supreme God, SatPurush, that person endowed with Bhakti, at the time of death by the strength of bhakti (by earnings of the True Naam) properly fixing his life-breath in the middle of the eyebrows, then while doing sumiran with a steadfast mind, goes to that Supreme Divine God (Purna Brahm – SatPurush) only. 8, 9, 10, in these three Verses, Brahm has given knowledge about the Purna Brahm God (SatPurush); he has also indicated that His name is Kavim - KavirDev.

In Bhagavad Gita Chapter 8 Verse 11, has said that whom the knowers of Vedas call eternal (Purushottam); where only the striving sanyasis, who are free from attachment, can go; whose seekers practice celibacy; I will tell that state (good way of bhakti) to you in brief.

Please ponder carefully: - In Bhagavad Gita Chapter 15 Verse 18, Kaal says that I am known as eternal (Purushottam) in lokved (folklore) because I (Kaal – Kshar) am superior to the beings in material /gross body and soul. But, in reality, Purushottam is someone else. His description is in Bhagavad Gita Chapter 15 Verse 17. Here Kaal tells about his sadhna. Read further in the following Verses.

In Bhagavad Gita Chapter 8 Verse 12 to 14, it is mentioned that closing all the nine doors and fixing the mind in the heart, establishing the life-breath in the forehead (the tenth door), being deeply absorbed in Aatm chintan (concentration in self), he who chanting ‘Om’, this one word, while remembering me (Brahm-Kaal) leaves his body, he attains my ultimate state (Mahaswarg/ Great Heaven). {God Kaal has called this ultimate state of his as bad (inferior) because with Brahm (Kaal) sadhna, a living being does not get fully liberated. Birth–death and the sufferings of the 84 lakh births are maintained. Therefore only by doing bhajan of that Supreme God and by only seeking His refuge, a living being attains the Supreme Peace (complete liberation) i.e. can get rid of birth-death. This has been stated clearly. In Bhagavad Gita Chapter 7 Verse 18, God Brahm, himself is saying that this is my (anuttamam gatim) inferior most salvation.}

Important: Brahm has said in these Verses that a bhakt who does jaap of ‘Om’ mantra, that too, who has faith only in one God (Brahm) and is not concentrated towards other gods-goddesses, Mai-Masaani, Hanuman, Ganesh, Brahm-Vishnu-Mahesh etc i.e. beyond the three gunas, who always remembers me (Brahm), I am easily attainable to him i.e. my benefit can be easily obtained. {One can not attain (see and meet) Kaal. Because in Bhagavad Gita Chapter 11 Verse 47 and 48, has clearly said that I am not attainable in any way. Yes, the benefit given by Kaal (brahm) is the cycle of heaven–hell–king–and the 84 lakh births in life forms. Therefore God himself has called this sadhna, in Bhagavad Gita Chapter 7 Verse 18, as anuttam (inferior) gatim (liberation) state.}

Happiness of a Devotee, Who has Attained Brahm, is Short-lived

In Bhagavad Gita Chapter 8 Verse 15, Kaal (Jyoti Niranjan) is saying that the happiness of a devotee who has attained me is transitory i.e. his birth-death continues. A Mahatma who has attained the supreme spiritual success (Purna Brahm) does not have birth-death (rebirth), the abode of misery i.e. he becomes completely liberated.

During Mahaprlay (the Great destruction), even Brahmlok, Built in a Brahmand, gets Destroyed

It is clear in Bhagavad Gita Chapter 8 Verse 16 that oh Arjun! All the loks upto Brahmlok are subject to creation and destruction.

Important: In this, Brahm (Kaal) is saying that all the loks upto Brahmlok are destructible. Even Brahma, Vishnu, Shiv and the living beings in their loks will not exist. Then how will their worshippers survive? Even the gods-goddesses will not survive. Then how will the worshippers survive? In other words, no one gets liberated; neither those who have reached Brahmlok, nor who have reached Vishnu lok, nor who have reached Shiv and Brahm lok. Then, he, who has come to me (i.e. who has attained Kaal-Brahm) also has rebirth. Because even Brahm-lok will get destroyed. Therefore no sadhak of Brahm gets liberated. Hence proved.

It is clear in Bhagavad Gita Chapter 8 Verse 20 that beyond that Unmanifested (Akshar Purush i.e. ParBrahm) the Second Eternal (Primeval-eternal forever) Unmanifested i.e. invisible is Purna Brahm. He even after destruction of all the living beings does not get destroyed.

Important: - The meaning of Holy Bhagavad Gita Chapter Verse 21 is that Kaal (Jyoti Niranjan) has been expelled from Satlok. Therefore is saying that even my supreme abode is that Satlok i.e. even I (Brahm-Kaal) have come from that eternal place. Like, if a person is living in a city after selling all the property in the village. If ever he meets someone from that same village then while talking to him that man from city says that even I am the resident of that village i.e. that is also my village. In reality that person does not even have any authority over the property in that village. Likewise Brahm i.e. Kaal God, the narrator of Gita is saying that even my supreme abode is that Satyalok.

It is mentioned in Bhagavad Gita Chapter 8 Verse 21 that, that which is called eternal and invisible is the (Param Gati) Supreme Salvation (Complete Liberation), having attained which, one does not return to the cycle of birth-death i.e. that Purna Brahm (SatPurush God) is invisible. Those who have attained that supreme state i.e.who are free from birth-death are completely liberated. That Satlok is superior to my lok and is my (Kaal-Brahm’s) supreme abode. Because even Kaal (Brahm-Jyoti Niranjan) has come from there (Satlok). Therefore he says that this is also my supreme abode i.e. my actual residence is also that Satlok.

In Bhagavad Gita Chapter 8 Verse 22, has said that Oh Paarth! The God under whom everybody comes, by whom this whole world is complete, that Supreme Purush (Purna Parmatma – SatPurush) is only attainable by undivided (he who, abandoning the bhakti of any other gods-goddesses and Hanuman, Mai-Masaani etc, with firm faith only in that one God worthy of adoration, Purna Brahm, does sadhna by doing jaap of naam is called a Bhakt) bhakti/devotion. The purport of the statement is that the benefit of the devotion of the Purna Parmatma is obtained by doing scripture-based sadhna with full faith in one Supreme God.

In Bhagavad Gita Chapter 8 Verse 23, has said that the time in which the yogis (bhakts) who give up their bodies are not reborn and in which those who die are reborn, I will tell that.

It is mentioned in Bhagavad Gita Chapter 8 Verse 24 to 26 that a day is formed of the quality of light of the element fire, which is known as Shukl Paksh (because of light) day. This is of six months’ duration. Similarly another is Krishna Paksh; this is also of a duration of six months. One who dies in Shukl Paksh, that devotee (yogi) is not reborn. He goes to Kaal lok (Brahmlok) for some time. Then after a long time when destruction occurs, then comes in the form of a living being. On the other hand, those devotees who die (give up body) in Krishna Paksh (of six months duration), they after finishing their virtuous earnings in Heaven for some time, return soon. But both the paths are inferior.

In Bhagavad Gita Chapter 8 Verse 27, 28, has said that those who are fully knowledgeable, they by abandoning both the paths, which is the sadhna prescribed in the Vedas, in me, the immemorial Kaal, taking refuge of that Aadi naam (Satnaam) which is the ancient (of long ago) path, go to the supreme place (Satlok) in the first time only; which means a sadhak who after obtaining updesh (spiritual instruction) of the three mantras (in which one mantra is Om and Tat - Sat are indicative) from the Tattavdarshi saint abandons all the religious acts of bhakti of Kaal i.e. jaap of ‘Om’ naam and the earnings of the five yagyas in Kaal, goes to Satyalok. Its description is also in holy Bhagavad Gita Chapter 18 Verse 66 that Arjun, abandoning all of my religious practices in me, you may go in the refuge of only that Almighty God, then I will make you debt-free i.e. will liberate you from all sins.