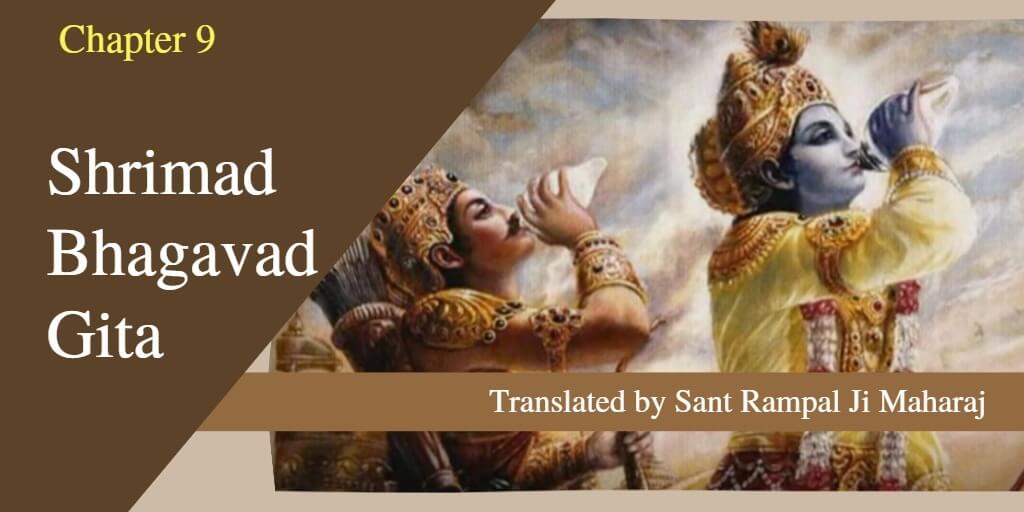 In Bhagavad Gita Chapter 9 Verse 1, 2, it is said that I shall now tell you the most secret knowledge of all the knowledge, knowing which man gives up evil acts i.e. becomes free from the evil deeds.

It is said in Bhagavad Gita Chapter 9 Verse 3 to 6 that if a devotee does not perform sadhna according to the rule then he remains in the cycle of birth-death. Then has said that all these living beings are based on that Supreme God / Parmatma, but I am separate (in Kaal lok) from them because Kaal lives separately in the twenty-first brahmand and in Brahm lok also, lives secretly and separately in MahaBrahma, MahaVishnu and MahaShiv form and in reality here, he keeps all the living beings organised by the Maya of Purna Parmatma. I (Kaal) am not in the living beings. Like, air has been stabilized in the sky; similarly, living beings, on the basis of their deeds, are organised in that Purna Parmatma by His (power) Maya only.

Origin of Living Beings from Prakriti and Brahm (Kaal)

In Bhagavad Gita Chapter 9 Verse 11, has said that those foolish people who do not know my param bhaav / prime chrater (Kaal’s prime character is mentioned in Bhagavad Gita Chapter 7 Verse 24 that my (Kaal) inferior character is that I never appear in form. This is my ever-lasting policy that I never appear in form by acquiring a body, they consider me the lord of the living beings, as an inferior person who has a body, i.e. I am not the embodied, Sri Krishna.

Brahm’s (Kaal) Worshippers are his own Food

In Bhagavad Gita Chapter 9 Verse 12, has said that those with demoniac nature, engaged in futile actions (to play cards, to drink alcohol, do useless talks, to smoke a hookah [smoke through water], to eat meat, to reproach, to watch cinema, to steal, to practice adultery etc) and futile hopes, foolish people, who have futile knowledge remain overpowered by monsterous nature.

Gist: - God Kaal is saying that in whichever way, a devotee performs scripture-based sadhna, for him I (Kaal) only am worthy of reverence. But in the end I will eat everyone; I will not leave anyone. Then on the basis of deeds, will put them in heaven-hell, the four salvations according to the law enacted by Kaal, and then in 84 lakh births of life forms. For evidence, see Bhagavad Gita Chapter 11 Verse 21 in which Arjun is describing the account seen with his own eyes. When Kaal God exhibited his actual Viraat form, in that Arjun is seeing and saying that God, you are even eating the hosts of gods, some in fear with folded hands are chanting your naam and qualities. The great sages (Maharishis) and the groups of siddhs by saying ‘Kalyan ho (let there be auspiciousness)! – Kalyan ho!’ praise you with special hymns of Vedas; you are eating them too. Then in Bhagavad Gita Chapter 11 Verse 32, Kaal God is saying that I have appeared to eat everyone and I am enlarged Kaal; I will not leave anyone.

The Result of Sadhna According to the Holy Vedas is Only Attainment of Heaven-Great Heaven, Not Liberation

In holy Bhagavad Gita Chapter 9 Verse 23, 24, it is stated that those who worship other gods-goddesses, they are also worshipping me alone (that for remaining in Kaal’s trap). But this pooja of theirs is not in accordance with the injunctions of scriptures (which means, one should not worship gods-goddesses; this is a foolish way of worship). Because I only am the enjoyer and master of all yagyas. Those bhakts do not know me properly and therefore they face decline: the sufferings of hell and the 84 lakh births. Like, in Bhagavad Gita Chapter 3 Verse 14-15, has said that situated in all the yagyas i.e. honoured, to whom all yagyas are dedicated, that God (Sarv Gatam Brahm) is Purna Brahm. He only, making deeds the basis, grants them to all the living beings. But until one finds a Complete Saint, Kaal (in form of man/mind) only enjoys the pleasure of all the yagyas. Therefore is saying that I am the enjoyer and master of all the yagyas.

Those Who Carry Out Shraadhs (Who Worship the Pitras/Deceased Ancestors) Will Become Pitra; Do Not Attain Liberation

In Bhagavad Gita Chapter 9 Verse 25, has said that the worshippers of gods, go to gods; worshippers of Pitras (deceased ancestors) go to Pitras; worshippers of ghosts/evil spirits (the offering of Pind) go to the evil spirits i.e. become ghosts; those who follow scripture-based (according to holy Vedas and Gita) way of worship, they come to me i.e. they enjoy for some time in heaven and great heaven etc constructed by Kaal.

The meaning of Bhagavad Gita Chapter 9 Verse 26, 27, and 28 is that whatever spiritual or worldly tasks one performs, one should perform it according to the way of worship mentioned in the Vedas based on my opinion, that worshipper would be benefited by me (Kaal) only. Its description is also given in this very Bhagavad Gita Chapter’s Verse 20, 21. In Bhagavad Gita Chapter 9 Verse 29, God says that I do not love or hate anyone. But immediately says that those who do my devotion lovingly, they are dear to me and I am dear to them i.e. I am in them and they are in me. A clear evidence of love and hatred is — like, Prahlad was surrendered to God and Hirnakshipu used to hate God. Then acquiring the Narsingh form, God saved his dear devotee and ended Hirnakshipu’s life by splitting open his stomach. Love towards Prahlad and hatred towards Hirnakshipu is self-evident.

In Bhagavad Gita Chapter 9 Verse 30, 31, it has been said that no matter how wicked (a prostitute or one who goes to a prostitute) a person is, if he loves God from heart then he also is worthy of being regarded a Mahatma. Garibdas Ji Maharaj says that: -

Once, a woman was being beaten in a village. At that time, a Mahatma arrived there. When he asked the fault of that woman, he was told that she is a corrupt (sluttish) woman. Mahatma Ji said, “Let me tell you how to punish her.” Everybody asked, “Please tell us.” Mahatma Ji said, “Everyone should hold a stone in his hand and should hit her in turn. But only he should hit her who has never committed this sin and will never commit it in future. If this is the case, then may hit her; otherwise, one will suffer.” In front of his eyes, stones dropped from everyone’s hands and everybody returned to their homes.

It has been stated in Bhagavad Gita Chapter 9 Verse 31 that such a person after listening to a satsang soon improves and then by properly doing bhakti strives to attain liberation. He remains dependant on my sadhna; therefore, that devotee’s bhakti is destroyed because complete liberation is only attained by bhakti of the Supreme God. To him, God, who is the narrator of Gita, is saying that I do not know the Absolute knowledge (Tattavgyan) of that Supreme God, for that search for the Tattavdarshi saints (in Bhagavad Gita Chapter 4 Verse 34). It is mentioned in Bhagavad Gita Chapter 9 Verse 34 that becoming a Mat-Bhakt (i.e. a scripture-based sadhak), who performs bhakti according to the injunctions of the scriptures (is known as Madbhaktae) with a resolute mind, salute me in reverence (respect me). In this way a sadhak, who is dependent on the scripture-based sadhna (Mat parayan) from the inner-soul/within, attains me alone. The purport is that he will not become a ghost-pitra, but will also not become completely liberated.

It has been stated in Bhagavad Gita Chapter 9 Verse 32, 33, and 34 that even a sinful woman, a prostitute and a person of a low caste (Shudra), who does my bhakti, attains my unsuccessful / fruitless ultimate state. Then devout souls, what to say about the Brahmins – Royal sages? My Kaal lok is perishable and full of miseries. If you want to live in it, then do my bhajan and he who will do my bhakti with mind engrossed in me (with undivided attention and abandoning the bhakti of gods-goddesses and the faith in the three gunas – Brahma, Vishnu and Shiv) will obtain benefit from me i.e. a bhakt who performs sadhna according to the scriptures (according to the way of bhakti mentioned in Vedas), after finishing his virtuous deeds in heaven, will bear hardships in birth-death and in lower births (of male and female dog, donkey etc). This reward for doing sadhna of God Kaal (Brahm) according to the Vedas is given by God Jyoti Niranjan. Its full evidence is given in this Bhagavad Gita Chapter’s Verse 20, 21. Because God (Kaal), the narrator of Gita, is saying that my pooja is jaap of ‘Om’ naam (Bhagavad Gita Chapter 8 Verse 13); only a Tattavdarshi Saint will tell about the bhakti of that Supreme God, by which one will attain complete salvation (Bhagavad Gita Chapter 4 Verse 34).

Even the sadhna of the invisible God Brahm (Kaal) should be done Matanusar (mat-parayan) i.e. according to the way of worship which Brahm God (the invisible power) has described for himself, which is, abandoning Aan-Upasna {pooja of gods-goddesses and among them the pooja of the three gods (Rajgun-Brahma, Satgun-Vishnu, and Tamgun-Shiv)}, by being dependent on only one God (Brahm) with uncorrupted bhakti, he who does Brahm pooja, only he obtains the reward preset by Kaal God. Heaven-hell, birth-death, sufferings of the births of 84 lakh life-forms – this is a permanent policy of Kaal (Brahm God) which Kaal God calls his Mat (this is my mat) in Holy Scriptures (Vedas, Gita Ji etc). Even after attaining the salvation of Kaal Brahm, a living being is not happy because God (Brahm) himself is stating that my salvation (gatim) is very bad (anuttam). Because a devout soul looses his life in doing Brahm (Kaal) sadhna with his body, mind, wealth and with generous mind thinking that I will become happy (completely liberated), but this does not happen. Therefore, Brahm (Kaal) God is also himself saying in Bhagavad Gita Chapter 7 Verse 18 that although those bhakts are noble souls, however, despite so much hard work, they only attain my bad/inferior salvation i.e. is not completely liberated; is not completely happy. Therefore, God then says that Arjun, you are very dear to me. Therefore I will impart the correct knowledge to you. You may do sadhna of that Supreme God. For that search for a Tattavdarshi Saint; then whatever way of worship he tells you, do sadhna according to that (Bhagavad Gita Chapter 4 Verse 34). Then your birth-death and the sufferings of 84 lakh births will be completely eliminated.