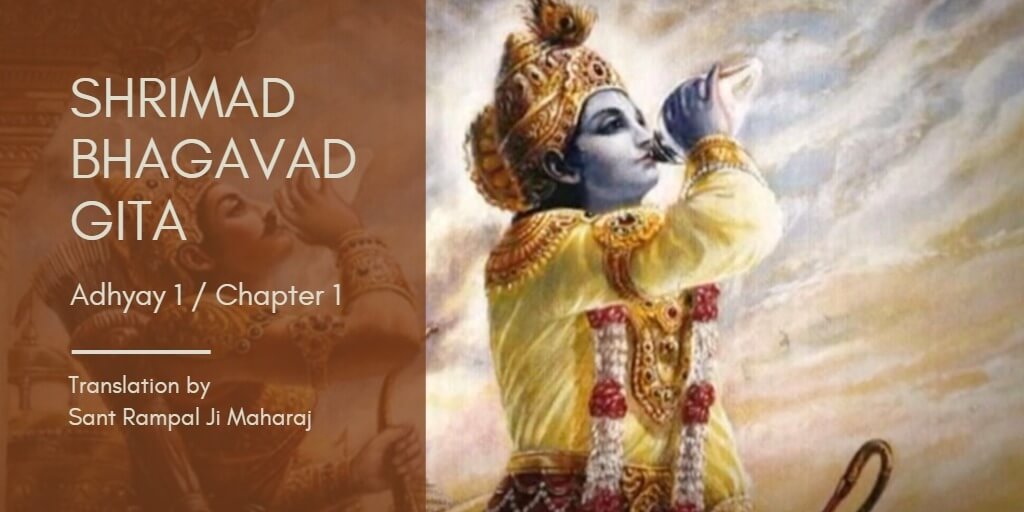 Saint Rampal Ji Maharaj has translated Chapter 1 of Shrimad Bhagavad Gita that portrays the dilemma of Arjun, who on seeing the army on the opposite side, is dismayed on having a look at his relatives. The thought of killing his own relatives & friends traverses his mind and makes him get disheartened. Arjun asks Shri Krishna to place his chariot in between the two mighty armies, so that he can take a closer look and contemplate. Thereafter, Arjun asks Shri Krishna for guidance and decides not to fight so as to avert the carnage and thus, moves to the back of the chariot and sits down. At this juncture, Shri Krishna starts the delivery of the knowledge of Bhagavad Gita.

Important Verses of Shrimad Bhagavad Gita - Chapter 1 Verse 1-19: In these Verses, Sanjay is informing Dhritarashtra about the state of the army and the distinguished warriors present in the army.

Bhagavad Gita Chapter 1, Verse 20-23: In these Verses, Arjun is saying that Lord! Take my chariot in the middle of both the armies, so that I can see which of the warriors are capable of persisting in front of me.

It has been described in Bhagavad Gita Chapter 1, Verse 24-25 that God Krishna parked the chariot in the middle of both the armies and said to Arjun that, ‘look at the Kuruvanshis and Kings standing ahead’.

Bhagavad Gita Chapter 1, Verse 26-45: In these Verses, it has been described that Arjun saw his relatives, sons and grandsons, brothers-in-law and fathers-in-law prepared to kill and get killed in the war and he discerningly said to Shri Krishna, that my body is trembling on seeing the innocent children, my friends, paternal cousins and relatives standing in front of me. The bow is slipping from my hand. I am even unable to stand anymore. I am not feeling comfortable with the idea of killing my own people. Oh Krishna! Neither do I wish for victory nor the pleasure of a kingdom. Because I do not want the kingdom after killing those, who themselves are not bothered about their kingdom & lives and are ready to die. I do not want to kill brothers, sons and grandsons, even if I get the kingdom of the three worlds (loks). Then why should I commit this sin for acquiring the kingdom of Earth? By killing them, I will incur sin only. How can we prosper by doing such sinful deeds? These kings standing in front have been blinded by delusion (moh-maya), but, we are wise. Why should we do something as a result of which, after the destruction of the family, other wicked people might assault our women? The off-springs will be illegitimate. Pativrata Dharma (the virtue of being loyal to one’s husband) will get destroyed and we will go to hell because of not doing any meritorious acts (dharma-karma). In reality, we are great sinners who have become ready to kill our own brothers, out of selfishness.

In Bhagavad Gita Chapter 1, Verse 46, Arjun said that Lord, to prevent this sin from occurring, if Dhritarashtra’s sons kill the unarmed me and the war does not occur, then also, I will prefer to die myself because with my death, lakhs of sisters will be saved from becoming widows and lakhs of innocent children will be saved from becoming orphans.

Bhagavad Gita Chapter 1, Verse 47: On saying this, Arjun sat with a heavy heart in the middle of the chariot and kept his bow down.

Note: In Gita Chapter 1, there are 47 Verses in total, out of which Verse 24-25 have been spoken by Shri Krishna. All the remaining Verses are the dialogues of Sanjay and Arjun.

Conclusion: Sant Rampal Ji Maharaj has given the correct interpretation and has explained the real meaning of the important Verses of Holy Shrimad Bhagavad Gita Chapter 1. Here, Sanjay describes the entire situation to Dhritarashtra regarding the happenings on the battlefield of Kurukshetra and the warriors present. There is a dialogue between Shri Krishna and warrior Arjun. Seeing his relatives, what is the mental state of the warrior Arjun? He denies fighting with the fear of shedding blood of his near and dear ones. He does not want to commit sins, just to get the Kingdom of the three worlds (loks) and/or the Earth. He denies getting such prosperity that is backed by the blood of his relatives. Imagining a huge massacre, Arjun out of grief, kept his bow down.