The whole of Bhagavad Gita Chapter 13 introduces us to the magnificence of the Supreme God.

In Bhagavad Gita Chapter 12 Verse 1 Arjun asks that those who constantly engage in your bhajan and those who worship the eternal invisible Supreme God in a superior most way, out of these who is the knower of yog i.e. the knower of the path of bhakti?

Without Satyanaam and Saarnaam the Worshippers of Brahm, in Form or as Formless, Remain in Kaal’s Trap | Bhagavad Gita Chapter 12

In Bhagavad Gita Chapter 12 Verse 2, Kaal God is saying that those who worship me, I consider them to be the best. Then in Bhagavad Gita Chapter 12 Verse 3, 4, has said that those who by appropriately restraining their senses worship the omnipresent, eternal, unchanging, invisible, immortal Supreme God, those who wish for well-being of all the living beings, who have equal visin everywhere also attain only me.

Important: Although in holy Vedas and Gita Ji the information given on that eternal, indescribable, invisible (Purna Brahm SatPurush) God is correct, however the way of worship, the one letter ‘Om’ mantra and yagya etc, of only the formless Kaal God has been mentioned. Therefore the Nirgun worshippers like, Markande, kept doing sadhna by doing jaap of ‘Om’ mantra considering the Supreme God to be Nirgun-Nirakaar (formless)-eternal, and in the end reached Mahaswarg (the Great heaven). Therefore God is saying that those worshippers are also not out of my trap i.e. those worshippers of mine (of Krishna form or Vishnu form) who will come to Vishnu lok, they after coming to me only and consuming the cream of their virtuous deeds will go to hell. Therefore those who worship me (in Vishnu form) soon become accomplished but this sadhna is also of the fools; it is not good.

In Bhagavad Gita Chapter 12 Verse 5 to 8, has said that those who do sadhna considering God as formless, they strive by inflicting pain to their body which is distressing and an ordinary sadhak can not do it. Therefore those who worship me (the Vishnu form) with undivided devotion, I by releasing them quickly will liberate them from the mortal world (for some time), and because they worship me as Vishnu therefore will come to Vishnu-lok only. There after finishing their virtues/merits they soon go to hell, and then in the 84 lakh births; Bhagavad Gita Chapter 14 Verse 6, 14, 18.

In Bhagavad Gita Chapter 12 Verse 9 to 18, God (Brahm) is saying that if you are unsuccessful in fixing (restraining) your mind then do Abhyas Yog (naam jaap). If you are unable to do Abhyas yog, then keep performing scripture-based actions. If you can not even do this, then by gaining victory over mind and intellect, and by renouncing the fruits of actions, you can soon attain peace (by renunciation). A devote who is free from love-hatred is very dear to me.

Important: God (Brahm) is saying that by restraining mind renounce the fruits of actions. When mind has been restrained then liberation is certain. {Mind could neither be restrained by Shiv, nor Brahma, nor by Vishnu, and nor by Brahm (Kaal). Then how can Arjun control the mind? Mind itself is Kaal (Brahm). A God with thousand arms (kalaas / skills) can only be restrained by the jaap of Param Akshar Brahm (Purna Brahm SatPurush) who has infinite arms.

Only that devotee can get liberated who obtains naam from a saint who is a worshipper of that Supreme God, remains within the bounds of Guru and who is endowed with the yog of practice of naam.}

Now the readers must themselves contemplate, mind can not be restrained by Brahm sadhna, therefore, there is no liberation.

In Bhagavad Gita Chapter 12 Verse 19, 20, has said that he who remains balanced in criticism and praise, is reflective, is contented with plain and simple food, is free from attachment, has steadfast mind and is endowed with devotion, such a sadhak is very dear to me, and he who follows the principle (viewpoint), that I have explained above, is exceedingly dear to me; which means, a devotee who is free from lust, anger, love, hatred, greed and attachment, who is balanced in criticism and praise, is very dear to me. Now the readers should themselves think.

This capability is even not in the three Gods (Brahma, Vishnu and Shiv). Then how can an ordinary devotee do it? Therefore he can not be dear to Kaal (Brahm) God, and therefore can not attain God. Hence proved that on the basis of actions heaven, hell and the 84 lakh births are the final achievements of a living being by Brahm sadhna. 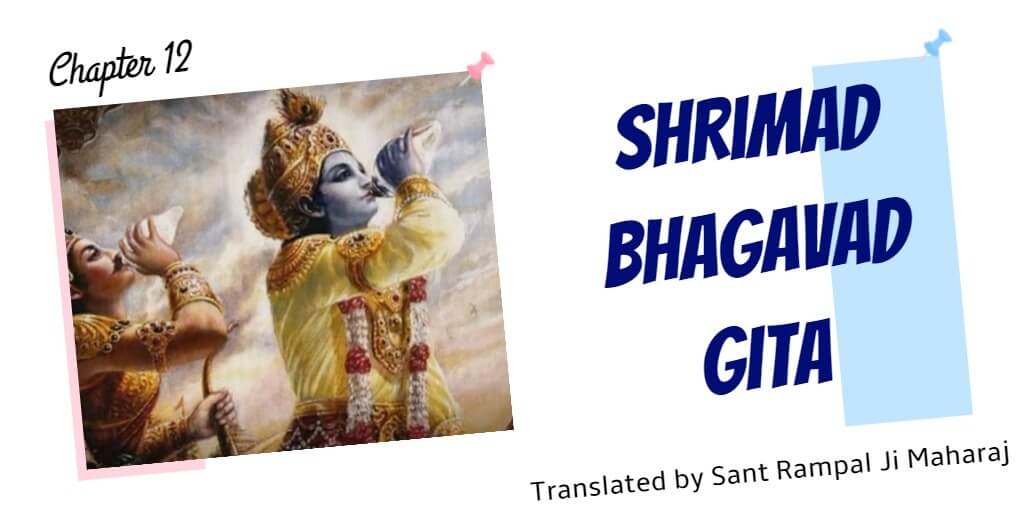