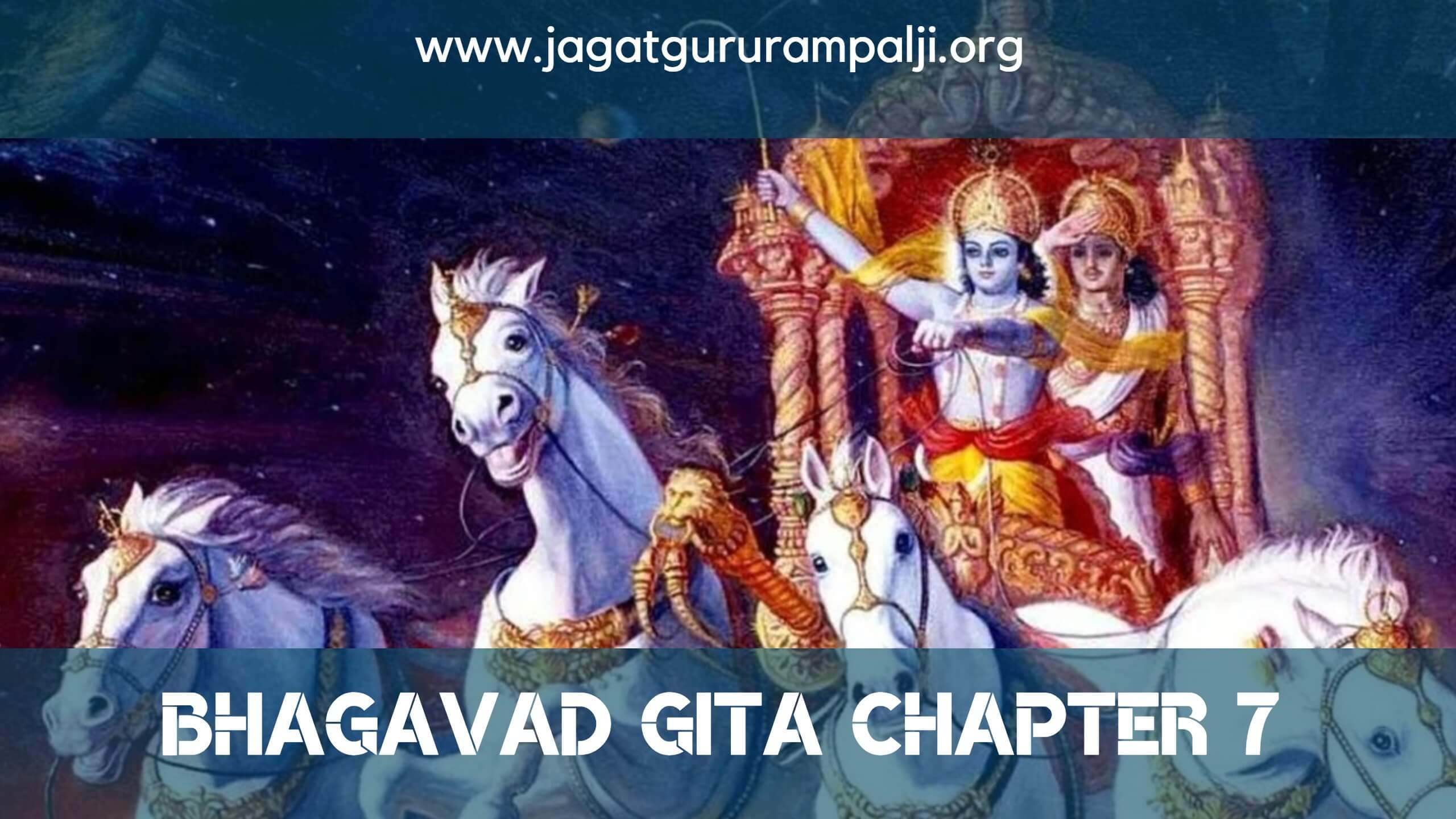 Chapter 7 Verse 1: O Paarth! With your mind attached to me, devoted to the opinion (mat), engrossed in yog/bhakti, the way in which you, free from all doubts, will know me in entirety, listen to that.

Chapter 7 Verse 2: I shall state Tatvgyan along with this special knowledge in full for you; knowing which there does not remain anything else to be known in this world.

Chapter 7 Verse 3: Among thousands of individuals, scarcely some one strives for attainment of God, and among those yogis also who strive, there is seldom one who knows me in essence i.e. in real form.

Chapter 7 Verse 4-5: A material body is made up of earth, water, fire, air, ether etc; similarly, a subtle body is made up of mind, intellect and pride. In this way, divided in eight ways i.e. this Ashtangi only is my Prakriti i.e. Durga. She is unique i.e. there is no other goddess like her, and in both the above-mentioned bodies, she only has the main contribution, and O mighty-armed! Know the other than this, by whom this whole world is sustained to be my second Prakriti i.e. Durga, who is conscious in jeev form i.e. has a form. Because Durga only hid in the ocean by creating other forms, and acquiring the three forms of Lakshmi, Savitri and Uma, married the three gods (Brahma, Vishnu and Shiv) and produced the living beings.

Chapter 7 Verse 6: Thus, by creating a maze, all the livng beings originate from these two Prakritis only, and I am the origin and the destruction of the whole universe.

Chapter 7 Verse 7: O Dhananjay! There is no other prime cause than the above-mentioned principle. This whole universe is strung in me like gems in thread.

Chapter 7 Verse 8: O Arjun! I am the flavour in water, light in the moon and the sun, the syllable ‘Om’ in all the Vedas, sound in the ether and the virility in men.

Chapter 7 Verse 9: I am the pure fragrance in the earth and the radiance in fire, and am the life in all the living beings and the austerity in ascetics.

Chapter 7 Verse 12: And also the characteristics of preservation from Satvgun Vishnu Ji and that of creation from Rajogun Brahma Ji and destruction from Tamogun Shiv Ji, consider all of them to be happening from me alone in a well-planned manner and according to the rules, but, in reality, neither am I in them, nor are they in me.

Chapter 7 Verse 13: As a result of these Gunas, by the effect of Satvik Shri Vishnu Ji, by the effect of Rajas Shri Brahma Ji, and by the effect of Tamas Shri Shiv Ji - by the three types of charactereistics, this whole world (all the living beings) is being enamoured to i.e is trapped only in my, Kaal’s web; therefore, does not know the Supreme Eternal God.

Chapter 7 Verse 14: Because this supernatural i.e. very extraordinary Trigunmayi Maya of mine is very dangerous/difficult to overcome, but those who always only worship me, they violate/cross over this Maya i.e. rising above the three gunas – Rajgun-Brahma Ji, Satgun-Vishnu Ji, and Tamgun-Shiv Ji, get engaged in the worship of Kaal-Brahm.

Chapter 7 Verse 15: Those whose knowledge has been stolen away by this Trigunmayi Maya i.e. by being dependent on the short-lived benefits obtained from the sadhna of Rajgun-Brahma, Satgun-Vishnu, Tamgun-Shiv ji, who do not even do my i.e. Brahm-worship, who are only limited to these three gods, such individuals who have demoniac nature, who are lowest among men, the evil-doers, fools, do not worship me i.e. they keep doing worship of the three gunas (Rajgun-Brahma, Satgun-Vishnu, Tamgun-Shiv).

Chapter 7 Verse 16: O the best of Bharats, Arjun! Those who perform virtuous acts – Artharthi (seeker of wealth) - one who performs rituals through Ved mantras to attain wealth, Aart (the distressed) - one who performs rituals by Ved mantras for removal of crisis, Jigyasu (inquisitive) - one who with the desire to gain information regarding God by gaining knowledge, becoming knowledgeable on the basis of the Vedas, becomes a speaker, and Gyaani (learned) - who has come to know that a human life is only for attaining God; even God can be attained by doing worship of only one Almighty God with an undeviated mind; such four kinds of devout men worship me.

Chapter 7 Verse 17: Among those, the learned, who is always fixed in the bhakti of one God, is the best because I am very dear to the learned and that learned is very dear to me.

Chapter 7 Verse 18: Because in my opinion all these learned souls are noble, but that soul engrossed only in me is dependent only on my very bad salvation.

Chapter 7 Verse 19: In the last birth after many births, he who has attained Tatvgyan (the true spiritual knowledge) worships me. Vasudev i.e. the Omnipresent Purna Brahm only is everything, he who knows this, that Mahatma is extremely rare.

Chapter 7 Verse 20: Those whose knowledge has been stolen away by the desires of those-those pleasures, they, inspired by their inherent nature, relying on the policy endowed with that-that darkness of ignorance, worship other gods.

Chapter 7 Verse 21: Whichever devotee wants to worship the form of whichever god with faith, I make the faith of that-that devotee firm in that very god.

Chapter 7 Verse 22: Endowed with that faith, that bhakt worships that god, and attains those desired pleasures from that god, granted by me alone.

Chapter 7 Verse 23: But that fruit of those dim-witted people is perishable. Those who worship gods go to gods and matavlambi, i.e. by the path of bhakti told by me, also come to me.

Chapter 7 Verse 24: Foolish people being unaware of my bad, permanent and prime character, consider to have attained the hidden i.e. invisible me, Kaal in form like a human being, incarnated as Krishna i.e. I am not Krishna.

Chapter 7 Verse 25: I, hidden by Yogmaya, do not appear before anyone i.e. remain invisible; therefore, this ignorant world (living beings) does not know me and my eternal, unchanging character of not taking birth i.e. considers me to have come in incarnation form. Because Brahm makes his numerous forms with his word power; he is Durga’s husband, therefore, is saying in this Verse that I do not take birth from Durga like Shri Krishna etc.

Chapter 7 Verse 26: O Arjun! I know all the living beings who have dwelled in the past and who are existing in the present and will come in the future. But no one knows me.

Chapter 7 Verse 27: O Bharatvanshi, Arjun! In this world, all the living beings are becoming very ignorant by the conflicting infatuation towards happiness and distress etc arising from desire and hatred.

Chapter 7 Verse 28: But those men, who perform virtuous acts without any desire, whose sins have become destroyed, those firmly determined devotees, free from the conflicting infatuation arising from love-hatred, worship me in all respects.

Chapter 7 Verse 29: Those who know my entire (adhyatm) spiritual knowledge and all actions, those men, resorting to that Brahm, strive to get rid of old age and death.

Chapter 7 Verse 30: Those devotees who correctly know me along with Adhibhoot, Adhidaiv and Adhiyagya, they know me, and have their mind engrossed even at the time of death i.e. being aware of the sufferings inflicted by me, keep their mind fixed in one Supreme God.