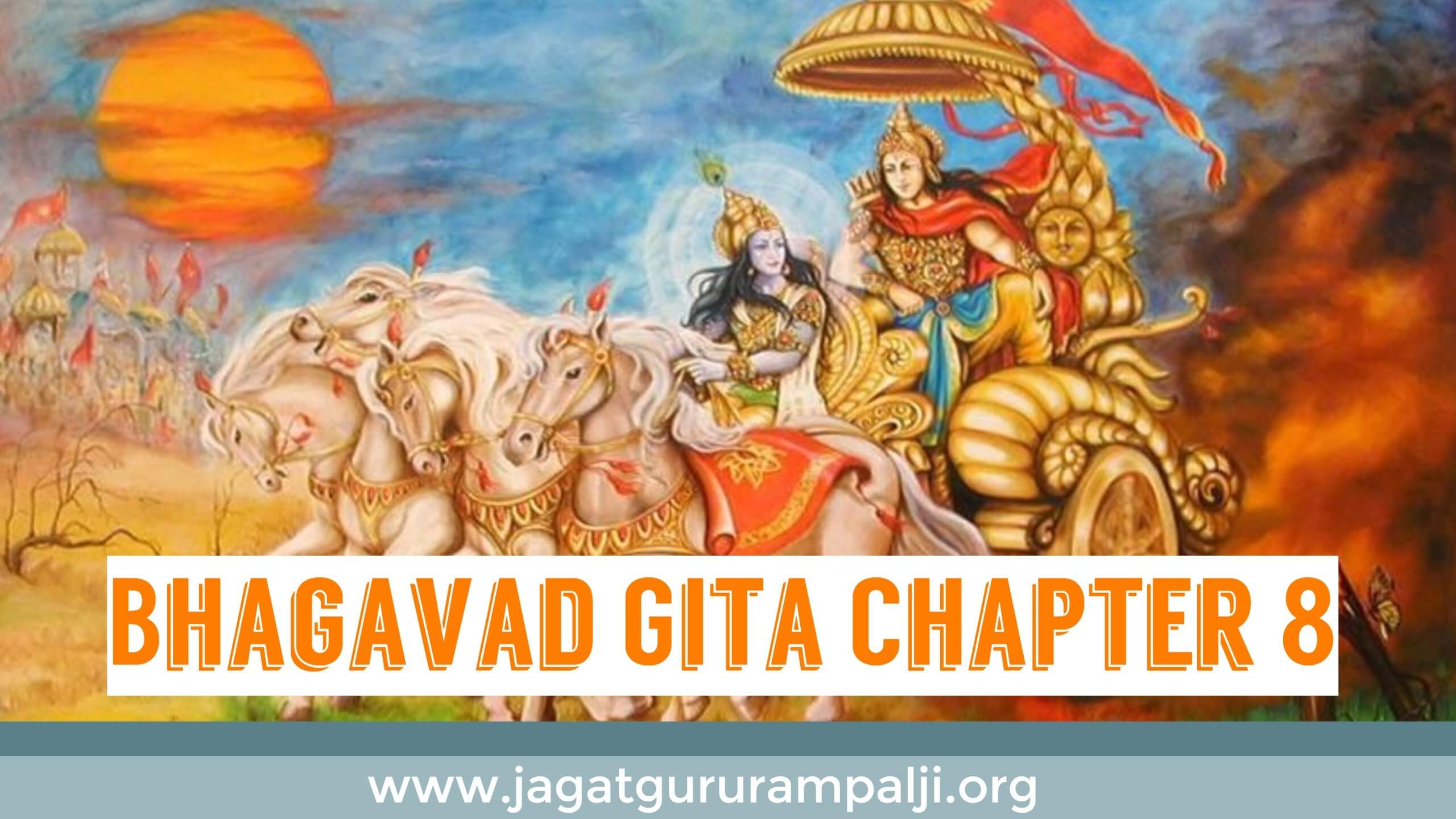 Chapter 8 Verse 1: O Purushottam! What is that Brahm? What is Adhyatm? What is Karm? What is called by the name Adhibhoot, and who is said to be Adhidaiv?

Chapter 8 Verse 2: O Madhusudan! Who is Adhiyagya here, and how is He in this body? And how is He known at the time of death by men who have engrossed minds.

Chapter 8 Verse 3: God Brahm, the giver of the knowledge of Gita, has replied – He is Param Akshar ‘Brahm’, who always lives with the soul; His own form i.e. a soul with the characteristics of God is called by the name ‘Adhyaatm’, and the sacrifice which gives rise to the nature of a jeev / soul / living being is called by the name ‘Karm’.

Chapter 8 Verse 4: Superior among embodied beings i.e. in this human body, Adhibhoot - Lord of the living being with perishable nature, and Adhidaiv – lord of divine power, and Adhiyagya – lord of yagya i.e. situated in the yagyas, is the Complete/Supreme God. Similarly, I am in this human body.

Chapter 8 Verse 5: One who even at the time of death, gives up his body while remembering me alone, he attains the nature of scripture-based bhakti, sadhna upto Brahm. There is no doubt in this.

Chapter 8 Verse 6: O son of Kunti, Arjun! While remembering whichever form i.e. whichever god, this man gives up his body at the time of death, he goes to that only because he always attains the same nature of bhakti i.e. nature.

Chapter 8 Verse 7: Therefore O Arjun! You should remember me at all times and fight as well. Thus, possessing the mind and intellect devoted to me, you will undoubtedly come to me i.e. whenever you will have a human birth, you will engage in my worship and will remain with me only.

Chapter 8 Verse 9: Kavirdev i.e. Supreme God Kabir who becomes famous as a poet, He is immemorial, controller of all, subtler than the subtlest, inconceivable, perpetually radiant like the sun. He who (does sumiran of) remembers that Sachchidanandghan Parmeshwar (the true happiness-giving Supreme God) beyond the darkness of ignorance.

Chapter 8 Verse 10: That worshipper equipped with bhakti, at the time of death, by the effect of the bhakti of the repetition of mantra (jaap of naam) by properly fixing the life-breath in the middle of the eyebrows, then with a steadfast mind goes to the unknown, divine Supreme God only.

Chapter 8 Verse 11: Mentioned in the aforesaid Verses 8 to 10, the True Happiness-giving Supreme God [Sachchidanand ghan Parmeshwar], whom the knower of the Vedas i.e. Tatvdarshi saints in reality call immortal. In whom striving worshippers, who are free from attachment, enter i.e. attain Him. The desirous of whom, practice celibacy i.e. they even try to attain that God by practicing celibacy. I will briefly i.e. in allusive manner say that state i.e. that method of bhakti, the way of worship for attaining that Supreme/Complete God to you.

Chapter 8 Verse 12: The method of bhakti which I am going to tell, in that a worshipper restraining all the doors of the senses, fixing the mind in heart and the life-breaths in the forehead, establishing in the contemplation of God, gets established in yog dhaaran i.e. in worship.

Chapter 8 Verse 13: Brahm, the giver of the knowledge of Gita, is saying that in the above-mentioned Verses 11-12, the mantra in Gita Gita Chapter 17 Verse 23 about which has been said to be for the attainment of the Supreme God, in that mantra of the path of complete salvation in which there is jaap of three mantras Om’–Tat’–Sat’; in that there is this one word ‘Om’/ॐ’ for me, Brahm, for doing sumiran i.e. sadhna while chanting. He, who does sumiran / remembers while giving up his body i.e. dies while doing sumiran in the final moments, attains supreme state – complete salvation. {Brahm has called his state/salvation as inferior/bad in Gita Gita Chapter 7 Verse 18. Therefore, here there is description of the attainment of the Supreme/Complete God i.e. of the supreme state of complete salvation.}

Chapter 8 Verse 14: O Arjun! He who always constantly remembers me with undivided attention, for that yogi who is constantly engrossed, I am easily attainable.

Chapter 8 Verse 15: The worshipper who has attained me is in short-lived abode of sorrow, repeated birth-death. The Mahatmas who have attained the highest spiritual success i.e. which is obtained from the worship of the Complete God, they do not have birth-death.

Chapter 8 Verse 16: O Arjun! All the loks upto Brahmlok are subject to repeated creation and destruction. But O son of Kunti, those who do not know this, they even after attaining me are reborn.

Chapter 8 Verse 18: The whole manifested world originates from the unmanifested i.e. invisible ParBrahm at the beginning of the day and at the arrival of night, merges into that same invisible i.e. hidden ParBrahm.

Chapter 8 Verse 19: O Paarth! This same multitude of living beings, having born, under the influence of deeds, dissolves at the arrival of night and is born again at the beginning of the day.

Chapter 8 Verse 21: That which is called by the name invisible and eternal, the place hidden in the darknes of ignorance is called the supreme state, having attained which, men do not return. That lok/place is superior to me and my lok.

Chapter 8 Verse 22: O Paarth! The Supreme God under whom are all the living beings, and the Sachchidanandghan God (True Happiness-giving Supreme God) from whom this whole universe has pervaded i.e. is complete, about whom there is mention in aforesaid Verses 20, 21 and Gita Gita Chapter 15 Verse 1-4 and 17, and Gita Chapter 18 Verse 46, 61, 62, 65 and 66, that Supreme God is only attainable by undivided devotion.

Chapter 8 Verse 24: Light Agni / Fire is the doer of the day, is called Shukl Paksh, and is the god of the six months of Uttraayan. The yogis who know God in essence, who have gone on that path after death attain God.

Chapter 8 Verse 25: Darkness is the doer of night, and is Krishna Paksh; and is of six months of Dakshinaayan. A yogi, who has gone on that path after death, attaining the light of the moon, enjoying the fruits of his virtuous deeds in heaven, returns.

Chapter 8 Verse 27: O Paarth! Thus, knowing the distinctness of these two paths in essence, no yogi is deluded. Therefore, O Arjun! You, in all times, may remain connected in Yog with a focussed/balanced mind i.e. constantly do sadhna for attaining the Supreme God.

Chapter 8 Verse 28: On knowing the aforesaid mystery in essence, in the study of the Vedas and the performance of yagyas (sacrificial ceremonies), austerities and charities etc - that which is called as the fruit of the meritorious deeds, undoubtedly relinquishing all that in me, a worshipper, knowing the knowledge beyond the Vedas does scripture-based worship, and in the final moments attains the Supreme Lok – Satlok of the Supreme God.