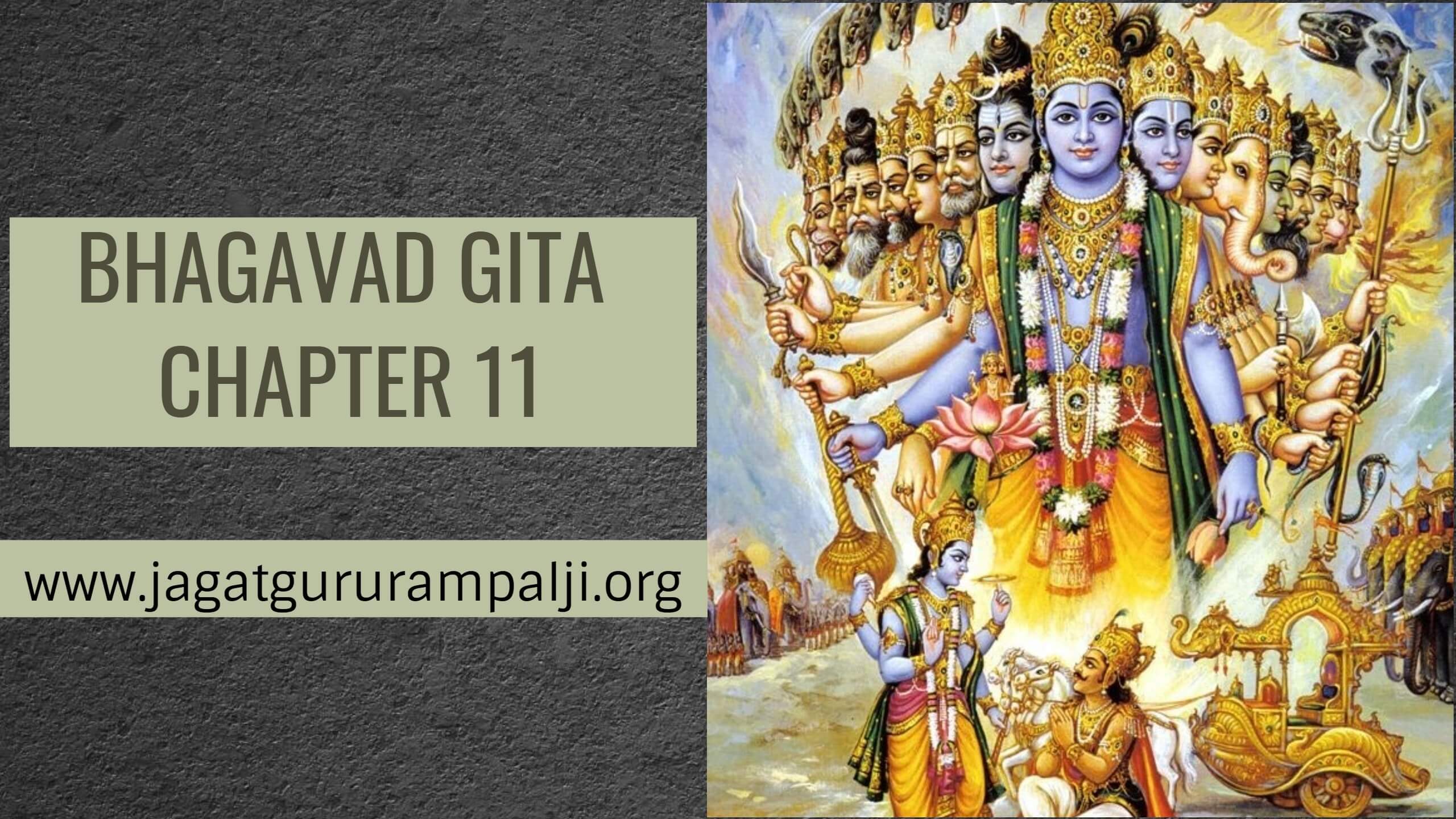 In Bhagavad Gita Chapter 11, Arjun requests to know about the reality of God. God Kaal grants divine vision to Arjun and shows him his ‘Virat’ (elaborated) Kaal form with numerous arms, faces, eyes etc. eating everyone good and bad. Arjun gets terrified on seeing the ‘Virat’ form. Read Bhagavad Gita verses in detail below.

Chapter 11 Verse 1: My this delusion has been destroyed by the scripture-based opinion, the supremely confidential spiritual words i.e. instructions which you have spoken to shower your grace.

Chapter 11 Verse 2: Because O Lotus-eyed! I have heard the origin and destruction of the living beings from you in detail and have also heard your immortal glory.

Chapter 11 Verse 3: O Supreme Lord! This is exactly as you describe yourself, but O Purushottam! I want to see your divine form possessing knowledge, grandeur, power, strength, vigour, and brilliance with my own eyes.

Chapter 11 Verse 4: O Lord! If you think that it is possible for me to see your that form then O Yogeshwar, show me that actual imperishable form.

Chapter 11 Verse 5: O Paarth! Now you behold my hundreds and thousands of divine forms of various types, colours and shapes.

Chapter 11 Verse 6: O Bharatvanshi Arjun! Behold the Adityas i.e. the twelve sons of Aditi, the eight Vasus, the eleven Rudras, the two Ashvini Kumars and the forty-nine Marudrnas in me and also behold many other wonderous forms that have never been seen before.

Chapter 11 Verse 7: O Arjun! Now behold the entire universe including the moving and non-moving beings situated in one place within this body of mine and also see whatever else you desire to see.

Chapter 11 Verse 8: But you are certainly incapable of seeing me with these natural eyes of yours. Therefore I grant you divine i.e. supernatural vision; behold my divine power of yog with it.

Chapter 11 Verse 10, 11: Arjun saw the Viraat form of God, possessing many mouths and eyes, presenting many wonderful sights, decked with numerous celestial ornaments and with numerous divine weapons raised in hands, wearing heavenly garlands and garments and divine fragrances smeared all over the body, full of all sorts of wonders, boundless and with faces in all directions.

Chapter 11 Verse 12: If thousands of suns were to rise at once in the sky, their radiance also might resemble the effulgence of that God.

Chapter 11 Verse 13: At that time the son of Pandu, Arjun, saw the entire universe divided in many ways situated in one place in that body of Lord Shri Krishna, the God of gods.

Chapter 11 Verse 14: Thereafter, that Arjun, struck with wonderment and with enraptured body, bowed down his head before Kaal God and spoke with folded hands.

Chapter 11 Verse 15: O Lord! I see all the gods and various multitudes of living beings, Brahma sitting on lotus-flower seat, MahaDev (Shiv) and all the sages and divine serpents in your body.

Chapter 11 Verse 16: O Lord of the whole universe! I see you with many arms, stomachs, mouths, and eyes and with unlimited forms on all sides. O Vishwaroop (One with universal form)! Neither do I see your end, nor the middle, and nor the beginning.

Chapter 11 Verse 17: I see you with the crown, mace and disc and as a mass of radiance effulgent from all sides, having a brilliance like that of a blazing fire and sun, difficult to look upon and as an immeasurable form in all directions.

Chapter 11 Verse 18: You only are Param Akshar i.e. the ParBrahm God, worthy of being known. You only are the supreme refuge of this universe. You only are the protector of the eternal dharm (righteousness) and you alone are the immortal primeval God. This is my opinion.

Chapter 11 Verse 19: I see you without a beginning, end and middle, possessing unlimited power, with unlimited arms, with eyes like the sun and the moon, with a mouth like blazing fire, and scorching this universe by your radiance.

Chapter 11 Verse 20: O Mahatman! This entire sky between Heaven and Earth and all the directions are pervaded by one you alone, and seeing this wondrous and dreadful form of yours, the three worlds are getting very distressed.

Chapter 11 Verse 21: Those hosts of gods enter in you and some out of fear chant with folded hands, and hosts of great sages and siddhs by saying this - ‘May there be auspiciousness (Kalyaan ho!)’ - pray to you with excellent hymns. Even then you are eating them.

Chapter 11 Verse 22: The eleven Rudras and the twelve Adityas and the eight Vasus, the worshippers, the VishweDev, Ashvini Kumars and the Maruts and hosts of Pitras and Gandharvs, Yakshas, the Demons and hosts of siddhs, they all look at you in amazement.

Chapter 11 Verse 23: O mighty-armed! Seeing your most fearsome gigantic form with many mouths and eyes, with many hands, thighs and feet, with many stomachs and many teeth, everyone is becoming terrified and so am I.

Chapter 11 Verse 24: Because O Vishno! Seeing you touching the sky, blazing, having many colours and with wide open mouth and with large shining eyes, I, with fearful inner-self, am not feeling calm and composed.

Chapter 11 Verse 25: Seeing your mouths with fearsome teeth and blazing like the fire of cosmic destruction, I have lost the sense of direction and also do not feel any happiness. Therefore O Devesh (God of gods)! O Abode of the universe! Please be pleased.

Chapter 11 Verse 26, 27: All those sons of Dhritrashtr along with the hosts of kings are entering into you and along with BheeshmPitamah, Dronacharya and that Karna, even the chief warriors of our side, all are rushing with great speed into your dreadful mouths with frightful teeth. Some can be seen trapped between your teeth with their heads crushed.

Chapter 11 Verse 28: Just as the various water currents of rivers impetuously rush towards the ocean i.e. enter in the ocean; likewise, those heroes of the world of men i.e. Earth also are entering in your blazing mouths.

Chapter 11 Verse 30: Consuming all the worlds with your blazing mouths, you are repeatedly licking them from all sides. O Vishno! Your dreadful light is scorching the entire universe by filling it with its effulgence.

Chapter 11 Verse 31: Tell me who are you in this dreadful form? O best among Gods! I bow to you. Be gracious! Aadi Yam i.e. Primeval Kaal, I especially want to know you because I do not know your disposition.

Chapter 11 Verse 32: I am the enlarged Kaal, the destroyer of the worlds. This time I have appeared to destroy these worlds; therefore, all the warriors who are situated in the opposite army will not survive even without you i.e. even if you do not fight, they all will be destroyed.

Chapter 11 Verse 33: Therefore you stand up! Attain fame and by conquering the enemies enjoy the kingdom rich in wealth and food. All these warriors have already been killed by me. O savyasaachin! You merely be an instrument.

Chapter 11 Verse 34: You kill Dronacharya and BheeshmPitamah and Jaydrth and Karn and also many other brave warriors already killed by me. Do not fear. You will conquer the enemies in the battle; therefore, fight.

Chapter 11 Verse 35: On hearing these words of Keshav God, the crowned Arjun, trembling, offering salutation with folded hands, even then being extremely frightened, bowing down, said to Lord Shri Krishna in a faltered voice –

Chapter 11 Verse 36: O Omniscient! It is indeed right that the universe is rejoicing by the glorification of your name, qualities and power, and is also getting filled with love and the terrified demons are running in all directions and the hosts all the siddhs are offering salutations.

Chapter 11 Verse 37: O Mahatman! You are the Almighty God, also the original creator and the greatest. Why should they not bow to you because O Anant (Infinite Being)! O (devesh) God of gods! O (jagannivas) Refuge of the universe, one who is the manifest and the unmanifestand beyond them, the Akshar i.e. Sachchidanandghan Brahm, he is you alone.

Chapter 11 Verse 38: You are the Primeval God, the eternal God. You are the supreme refuge of this universe, the knower and worthy of being known, and the supreme abode. O One with limitless forms! This whole universe is pervaded by you.

Chapter 11 Verse 41, 42: Unaware of this power/glory of yours, considering you as my friend, in madaness or also in love, O Krishna, O Yadav, O friend, thus whatever I have rashly said without consideration, and O Achyut, you have been dishonoured by me in amusement while playing, lying in bed and at mealtime either alone or also in front of those friends; O one with inconceivable power/glory, I ask for forgiveness from you for all those offences.

Chapter 11 Verse 43: You are the father of this moving and non-moving world and the greatest guru and the most venerable. O one with unequalled power! There is no one even equal to you in the three worlds then how can there be anyone greater than you?

Chapter 11 Verse 44: Therefore O God! I offering my body fully in your feet (prostrating before you) and saluting in reverence request the worshippable you, God to be gracious. O God! Just as a father tolerates the offences of a son, a friend of a friend and a husband of the beloved wife; likewise, you are also worthy of tolerating my offences.

Chapter 11 Verse 45: Seeing this wonderous form of yours which has never been seen before, I am feeling overjoyed, and my mind is also getting perturbed with fear; therefore, you only show me that Chaturbhuj (four-armed) Vishnu-form of yours. O God of gods! O refuge of the universe! Be pleased.

Chapter 11 Verse 46: I want to see you as before, adorned with crown and holding a mace and disc in hand. O Universal Form! O thousand-armed! You appear in that same Chaturbhuj (four-armed) form.

Chapter 11 Verse 47: O Arjun! Being pleased with you, I have shown through the power of my yog, this supremely effulgent, the Primeval and boundless Viraat form of mine to you, which no one else other than you had seen before.

Chapter 11 Verse 48: O Arjun! In the world of men, I in this universal form can neither be seen by the study of Vedas, nor by yagyas, nor by charity, nor by rituals, and nor only by severe penances by anyone other than you.

Chapter 11 Verse 49: You should not be distressed on seeing this kind of dreadful form of mine and should also not be stupified. You, becoming free from fear and with affectionate mind, again see that same this form of mine.

Chapter 11 Verse 50: Having said thus to Arjun, Vasudev God then showed his same Chaturbhuj form, and then again assuming the gentle appearance of Mahatma Krishna consoled this frightened Arjun.

Chapter 11 Verse 51: O Janardan! Seeing this very peaceful human form of yours, I have now regained by composure and am restored to my natural state.

Chapter 11 Verse 52: My Chaturbhuj (four-armed) form that you have seen it is very rarely seen i.e. it is very difficult to see it. Even the gods are always longing to see this form.

Chapter 11 Verse 53: The way in which you have seen me in Chaturbhuj (four-armed) form, in this way, neither can I be seen through Vedas, nor by penance, nor charity and nor only by yagya.

Chapter 11 Verse 54: But O Parantap Arjun! By undivided devotion I can be clearly seen in this Chaturbhuj (four-armed) form and be known in essence and it is possible to properly enter my Kaal’s web.

Chapter 11 Verse 55: O Arjun! He who performs all actions towards me according to the scriptures, who is best according to my opinion, my Matavlambi devotee, is detached and free from enmity towards all the living beings, he comes to me alone; which means he comes to the great heaven built in my Brahm Lok, where sometimes this Kaal grants audience in Vishnu form. Brahm Kaal cannot be attained in the actual form.