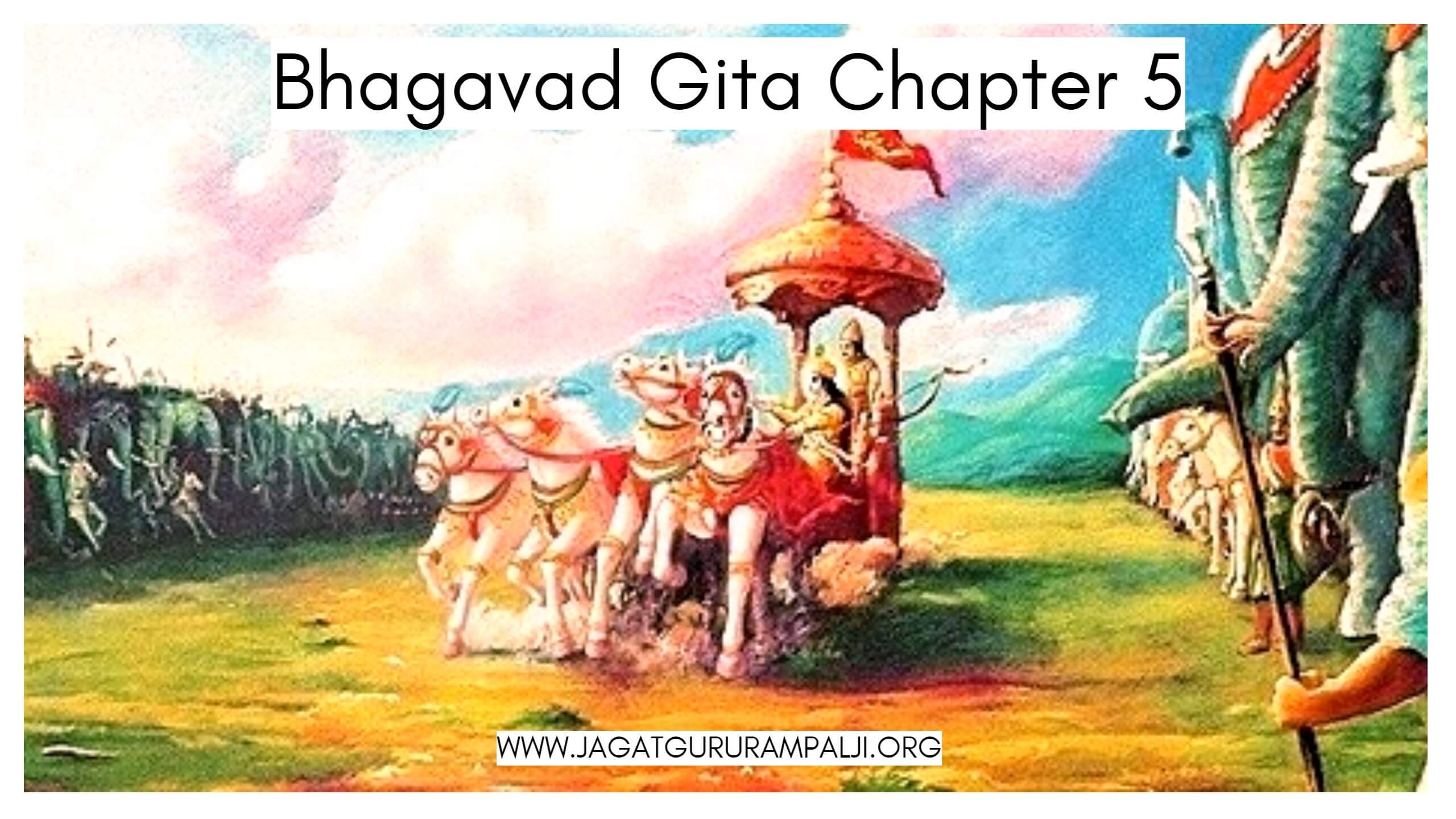 In Bhagavad Gita Chapter 5, it has been told that Karmyogi is superior to Karm Sanyasi and that one does not become free from vices by doing worship mentioned in the vedas.

Chapter 5 Verse 1: O Krishna! You praise the renunciation (sanyas) of actions (karm) i.e doing sadhna by abandoning actions, sitting in a posture, closing ears etc, and then praise karmyog i.e. to do sadhna while performing actions. Therefore out of these two tell me that way which is definitely auspicious for me.

Chapter 5 Verse 2: Because of not finding a Tatvdarshi saint and as a result not being aware of the true bhakti, a devotee’s, who has obtained sadhna opposite to the scriptures, departure into the forest on abandoning home inspired by the urge to attain God, or abandoning actions sitting in one place closing nose, ears etc or doing meditation, and also doing sadhna devoid of the injunctions of the scriptures while performing actions, both are useless i.e. are not auspicious and are not to be done. Those who do sadhna according to the injunctions of the scriptures and taking Sanyas (renunciation) live in monastery, and do not take karm sanyas (renunciation of actions), and those who after getting married stay at home, the way of worship of both of them is not inauspicious, but in above-mentioned these two also if even after staying in a monastery one is work-thief, then compared to that Karm Sanyas, Karmyog i.e. doing scripture-based sadhna while performing worldly actions is superior.

Chapter 5 Verse 3: O Arjun! A devotee who neither hates nor desires for anyone, that Tatvdarshi, because a person who possesses love-hatred, his mind keeps wandering and the mind of a devotee devoid of these is engrossed in adoration and praise of God even while doing work, therefore, he is always a Sanyasi. Because only that person freely describes correctly the knowledge worthy of being known of the happiness of complete liberation from the bondage of actions with full certainty.

Chapter 5 Verse 4: Ignorants say that on the basis of Tatvgyan, those who do one type of sadhna as a householder or a bachelor, both of them obtain different results. They are not even Pandits. Individuals who are truly established in one Almighty God, they both on the basis of Tatvgyan obtain same results. There is vivid description in Gita Gita Chapter 13 Verse 24-25.

Chapter 5 Verse 5: By doing sadhna according to the injunctions of the scriptures the place which is attained by the Tatvgyanis, that same place is also attained by ordinary persons i.e. Karmyogis after taking updesh from Tatvdarshis. Therefore one who sees Gyanyog and Karmyog as one in the form of result, he only sees the reality; which means he actually knows the path of bhakti.

Chapter 5 Verse 6: O Arjun! Contrary to this, Karm Sanyas / renunciation of action because of being a sadhna opposite to the injunctions of holy scriptures leads to only misery, and a devotee who has sadhna in accordance with the scriptures attains God promptly.

Chapter 5 Verse 7: He, whose mind is free from doubt due to Tatvgyan and true bhakti, a holy soul who has conquered his senses, that living being, who has gained Tatvgyan, by true bhakti of the Master of all the living beings considering all the living beings as one in soul form, while living in the world engrossed in true bhakti, and while doing worldly actions, does not get lost i.e. does not get attracted to offspring and wealth. Because he becomes enlightened through Tatvgyan that this offspring and wealth are not mine. For instance, if a person is staying in a hotel, there he does not consider the servants and other materials (T.V., sofa set, telephone, bed, and the room in which he is staying) as his. That person knows that these are not mine. Therefore neither does he hate them nor develops any attachment and does not forget his main goal. Therefore, without considering the house in which we are living, all this wealth and offsprings as ours, at the same time while living lovingly, we should maintain the desire to attain God.

Chapter 5 Verse 8, 9: Tatvdarshi – a yogi / bhakt engrossed in God even while seeing, hearing, touching, smelling, eating, walking, sleeping, breathing, speaking, giving, taking, opening eyes and closing eyes, considering this that all the senses are operating in their own objects i.e. I do not do any evil act. He certainly believes this that I do not do anything i.e. do not perform an act which incurs sin.

Chapter 5 Verse 10: A person who, offering all actions to the Purna Parmatma and abandoning attachment, acts in accordance with the ordinances of the scriptures, that devotee does not become stained by sin just as a lotus leaf is not tainted by water i.e. by bhakti of the Supreme God a devotee becomes free from all bondages which are formed as a result of sinful actions.

Chapter 5 Verse 11: Like a stay in a hotel, bhakts living in this world even by only abandoning attachment through senses, mind, intellect and body perform actions like sumiran of Satnaam, charity, service to Satguru and good conduct in the world for purification of the inner-self i.e. for self-wellbeing.

Chapter 5 Verse 12: Abandoning the fruits of actions, a bhakt who is engaged in scripture-based true sadhna attains the eternal i.e. supreme peace, and an Asaadh i.e. one who performs sadhna devoid of the injunctions of the scriptures, becoming attached to the fruits of actions for the fulfilment of desires, becomes bound as a result of sinful actions.

Chapter 5 Verse 13: Diverting the mind from the benefits of Kaal lok on the basis of Tatvgyan, and on the basis of accumulated deeds i.e. the accumulated earnings of true bhakti from all scripture-based religious acts i.e. from true sadhna, with full determination, one resides in the real happiness i.e. in Satlok which is endowed with supreme peace of complete salvation. Thus the bodily soul i.e. the soul inseparable from the God, neither acting nor causing one to act in the fort-like body of five elements with nine gates, resides happily in Satlok only after attaining complete salvation.

Chapter 5 Verse 14: The Master of the lineage, the Supreme God, first of all, creates the world. At that time there was neither any basis of doership, nor of actions, and nor the union of actions-results. On the contrary, only the fruit of action performed by all the living beings by nature is operating.

Chapter 5 Verse 15: Neither does the Supreme God give results of anyone’s sins, nor of anyone’s auspicious acts i.e gives results according to the set rules but knowledge is masked by ignorance. Due to absence of Tatvgyan all animal-like ignorant men are being deluded by that only i.e. out of their nature by performing acts of bhakti and worldly acts opposite to the ordinances of the scriptures are getting attracted to the short-lived happiness. God forgives the sins of those devotees who perform acts of bhakti according to the injunctions of scriptures otherwise gives them what is destined. See a detailed account of this in Holy Gita Gita Chapter 16 and 17.

Chapter 5 Verse 16: On the other hand, those whose ignorance has been destroyed by the Tatvgyan of that Supreme God, who is the inseparable companion of the soul and is therefore called Soul, their that Tatvgyan illuminates that Supreme God like sun i.e. dispels the darkness of ignorance.

Chapter 5 Verse 17: That embodied soul equipped with the Tatvgyan (true spiritual knowledge), whose mind is completely engrossed in the true knowledge of that Supreme God, is always single-mindedly established in the Omnipresent God. It is also sinful to do sadhna opposite to the injunctions of the scriptures on the basis of the Tatvgyan (true spiritual knowledge) based on that God, and as a result of it one incurs sin only instead of merits; therefore by doing true bhakti and becoming free from sins, they by becoming free from birth-death attain the state of not returning to the world i.e. attain complete liberation/salvation.

Chapter 5 Verse 18: Fully equipped with the hidden Tatvgyan (true spiritual knowledge) i.e. a completely Tatvgyani devotee looks upon a Brahmin, a cow, an elephant and a dog and an out-caste with equanimity. In reality, he who possesses such characteristics is indeed a learned i.e. a Tatvgyani.

Chapter 5 Verse 19: In reality, those whose minds are fixed in equanimity have conquered the whole world in this alive state i.e. they have become manjeet/conquerers of mind. Undoubtedly those devotees, free from sin, are equivalent to God i.e. have become an innocent soul, and therefore they are situated in the Purna Parmatma only. Many merits of a sin-free soul and God are same, like eternal, free from love-hatred, free from birth-death, self-illuminated; although there is a lot of difference in power.

Chapter 5 Verse 20: He who neither rejoices on receiving something pleasant, nor despairs on receiving the unpleasant, that person with steady intellect, free from doubts, and who has complete knowledge of the essence of God, is always solely/firmly situated in the Supreme God.

Chapter 5 Verse 21: A devotee who is not attracted to the external objects, the happiness of sumiran which he finds within self, that devout soul engrossed with an undivided attention in the practice of bhakti of God experiences the eternal bliss i.e. attains complete salvation.

Chapter 5 Verse 22: In reality, all these pleasures which are born of the combination of senses and the sense objects are certainly the causes of the miserable births, and have a beginning and an end i.e. are not eternal. O Arjun! A wise, discerning man does not become attracted to them.

Chapter 5 Verse 23: Before destruction of the body, a devotee who in this human body becomes competent in tolerating the impulses arising from lust and anger, only that person is a devotee engrossed in God and only he is happy.

Chapter 5 Verse 24: A determined man who is happy within his inner soul, who is engrossed in that omniscient God only who lives with the soul in an omniscient form and who is illuminated from within i.e. who does not go astray while doing true bhakti based on the knowledge of holy scriptures, that devotee endowed with God-like qualities attains the peaceful Brahm i.e the Supreme God.

Chapter 5 Verse 25: Those whose all sins have been destroyed by doing scripture-based sadhna, whose all doubts have been dispelled i.e. who have not strayed from the path, who are engaged in the welfare of all the living beings and who are situated in the endeavour i.e. sadhna of God, those saintly men attain the peaceful Brahm i.e. the Supreme God.

Chapter 5 Verse 26: Those men who are free from lust and anger, are industrious in the bhakti of God, who have seen and met God, who are dependant on God, they only deal with the peaceful Brahm i.e. Purna Brahm Parmatma (Complete/Supreme God) in all respects i.e. worship only one Complete/Supreme God.

Chapter 5 Verse 27, 28: In reality, expelling the pleasures of the external objects and fixing the vision in the middle of bhrkuti (eyebrows) and by equalising the incoming and outgoing breath moving in the nostrils, one who does sumiran of Satyanaam, who has conquered senses, mind and the intellect i.e. who concentrates on sumiran of naam and does not let his mind wander, such a reflective worshipper who is dedicated towards attaining salvation, and has become free from desire, fear and anger, in reality, he is always liberated.

Chapter 5 Verse 29: Those, who considering me to be the enjoyer of all the sacrifices and austerities, the God of the gods of all loks, and as unselfishly compassionate and the lover of all living beings, remain dependant on me, their peace ends completely i.e. their capacity to remain in peace finishes. Therefore even my worshipper remains highly distressed.