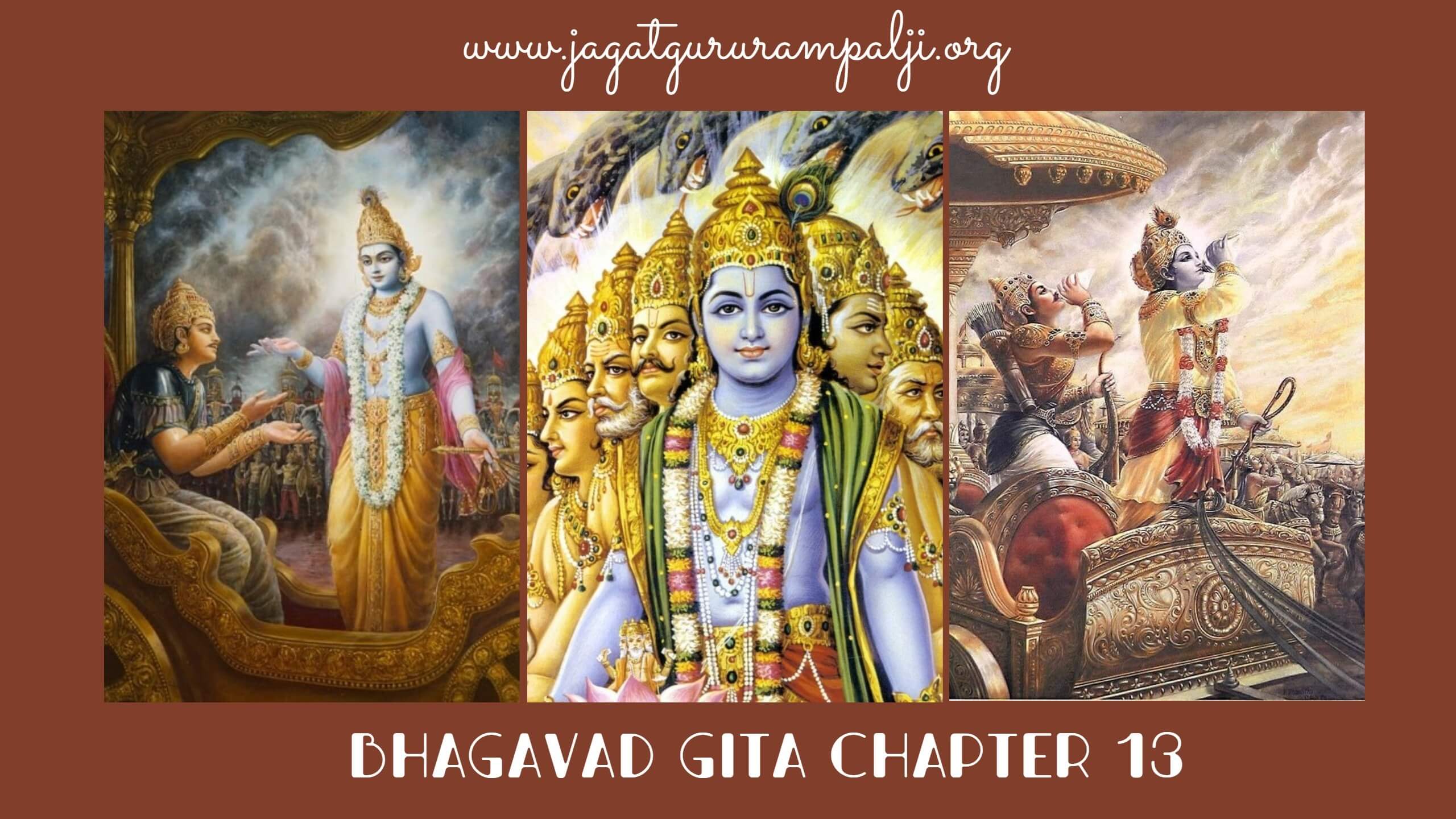 In Bhagavad Gita Chapter 13, explanation about the body (Kshetr) and the defects within the body has been elaborated; the defects being lust, anger, greed, attachment, false-ego etc. One who has the understanding of all the senses and the sense-objects is known as ‘Kshetragya’. The narrator of Bhagavad Gita calls himself alone as Kshetragya.

Chapter 13 Verse 1: O Arjun! This body is known as Kshetr and learned men who know the essence call the one who knows this by this name Kshetragya.

Chapter 13 Verse 2: O Arjun! Know me alone as the knower in all the Kshetras i.e. bodies, and knowing Kshetr-Kshetragya in essence is the knowledge; this is my opinion.

Chapter 13 Verse 4: It has been explained by the sages in many ways, and has also been said distinctively by numerous Vedic mantras and by properly concluded, reasoned verses of Brahmsutra.

Chapter 13 Verse 5: The five great elements, ego, intellect and also the unmanifested and the ten senses, one mind and the five sense objects i.e. sound, touch, sight, taste and smell.

Chapter 13 Verse 6: Desire, hatred, joy, sorrow, material body / body of material flesh, consciousness and steadfastness, in this way along with the defects this Kshetr has been described.

Chapter 13 Verse 7: Absence of arrogance, absence of pretentiousness, non-violence - to not torture any living being in any way, forgiveness, simplicity, service to Guru with faith and devotion, internal and external purification, steadiness of inner-self and self-control.

Chapter 13 Verse 8: Absence of attachment to the enjoyments of the pleasures of senses, and also absence of egoism; to repeatedly reflect upon the distresses and faults in birth, death, old age and disease etc.

Chapter 13 Verse 9: Absence of attachment to son, wife, home and wealth etc, absence of possessiveness, and forgetting Ishtvaadita i.e. the attainment and non-attainment of the venerable god and the other non-venerable god, constant equanimity of mind.

Chapter 13 Verse 10: An exclusive devotion to me, devotion based on only one God; and nature of living in solitary and pure places and to have no affection towards the masses of vicious people.

Chapter 13 Verse 11: Constant state in the spiritual knowledge and to see with a view of tatvgyan (true knowledge) – it has been said that all this is knowledge and whatever is opposed to this is ignorance.

Chapter 13 Verse 12: I shall properly declare him who is worthy of being known and knowing whom one attains the supreme happiness. That beginningless Supreme Brahm is neither called manifest, nor unmanifest.

Chapter 13 Verse 13: He has hands and feet in all directions, has eyes, heads and faces on all sides, and has ears in all directions. Because he is situated pervading everyone in the world.

Chapter 13 Verse 15: He dwells inside and outside all the moving and non-moving beings and is also in the form of the moving and the non-moving, and because of being subtle is incomprehensible i.e. one whose correct state can not be known and He only is situated very near and also far away.

Chapter 13 Verse 16: Even though undivided, He is situated within the living beings as if divided and that God, worthy of being known, is the sustainer of the living beings in Vishnu-form and is the destroyer and the originator of all.

Chapter 13 Verse 17: That Purna Brahm is said to be even the light of the lights and other than the Maya-dhaari Kaal. That God is (a form of) knowledge, worthy of being known and worthy of being attained through Tatvgyan (True Spiritual Knowledge), and is situated in everyone’s heart in a special way.

Chapter 13 Verse 18: Thus I have said in brief the knowledge about the body and the God who is worthy of being known. And Mat’ bhakt i.e. an inquisitive person who knows this opinion/viewpoint i.e. my devotee who knows my opinion knowing this in essence acquires that same viewpoint i.e. Matavlambi. Abandoning Kaal i.e. Brahm-sadhna and by doing sadhna of Purna Brahm, SatPurush, is completely liberated from birth and death.

Chapter 13 Verse 21: Because of making the embodied soul, possessing the three gunas born of Prakriti, experience the results of its actions, Purush i.e. God situated in Prakriti only is the one who experiences, and it is the association with these gunas which is the cause of making this embodied soul take birth in good and bad wombs. This very evidence is also in Gita Gita Chapter 14 Verse 5, and in Gita Chapter 18 Verse 16 too.

Chapter 13 Verse 22: This SatPurush i.e. Purna Brahm, also situated in this body, in reality, the most superior God is other than the giver of the knowledge of Gita i.e. is someone else. He only is called the Spectator because of being the witness, the Permitter because of giving the genuine consent, the Sustainer because of nurturing and protecting everyone, and the One who experiences because of making the soul experience the results of its actions, and because of being the Lord of even Brahm and ParBrahm, Maheshwar (the greatest God) and Parmatma. This evidence is also in Gita Gita Chapter 15 Verse 16-17.

Chapter 13 Verse 23: In this way, he who knows SatPurush and Maya i.e. Durga along with the gunas i.e. Rajgun-Brahma, Satgun-Vishnu and Tamgun-Shiv ji in essence, he in all respects turns away from the way of bhakti opposite to the scriptures in the present time i.e. while performing scripture-based acts of bhakti in the present time is not reborn.

Chapter 13 Verse 24: Many men see God with their divine vision through (dhyaan) meditation in their body in the inner-self; many others through the yog of knowledge and many others see i.e. perceive through yog of actions. There is also evidence in Gita Gita Chapter 5 Verse 4-5.

Chapter 13 Verse 25: Contrary to this, others, not knowing in this way, worship according to what they hear from others i.e. from the men who know the essence/truth, and they, who follow what they hear, also certainly cross beyond the death-like ocean of world.

Chapter 13 Verse 26: O Arjun! Whatever moving and non-moving beings are born, know them all to be born from the union of Kshetr and Kshetragya.

Chapter 13 Verse 27: One who sees the Parmeshwar as imperishable and situated equally in all the moving and non-moving beings undergoing destruction, only he sees the truth i.e. is a completely knowledgeable person.

Chapter 13 Verse 28: Because seeing the all-pervading Supreme God equally in everyone, he does not destroy himself by the self i.e. does not commit suicide. As a result of this, he attains the supreme state/salvation.

Chapter 13 Verse 29: And a devotee who sees all the actions as being performed only by Prakriti in all respects and sees the God as a non-doer, only he sees the truth.

Chapter 13 Verse 30: When a devotee sees i.e. becomes aware of the diverse nature and the expansion of the living beings, then that devotee situated in one God attains that Supreme God only.

Chapter 13 Verse 31: O Arjun! Because of being beginningless and His power being nirgun (formless), this eternal God while residing in the body also, in reality, neither does anything, nor is affected.

Chapter 13 Verse 32: Just as the all-pervading sky because of being subtle is not tainted; similarly, God along with soul situated everywhere in the body is not tainted by the gunas/qualities of the body.

Chapter 13 Verse 34: Thus those who with the eyes of knowledge i.e. by Tatvgyan become conversant with the difference between the body and Brahm-Kaal, those living beings, gaining freedom from Prakriti i.e. Maya-Ashtangi, the power released by Kaal, attain the Supreme God other than the giver of the knowledge of Gita. In Bhagavad Gita Chapter 13 Verse 1-2, it is said that one who knows Kshetr i.e. body is known as Kshetragya. Therefore know me alone as Kshetragya. It is proved from this that the giver of the knowledge of Kshetragya is Kaal i.e. Brahm.