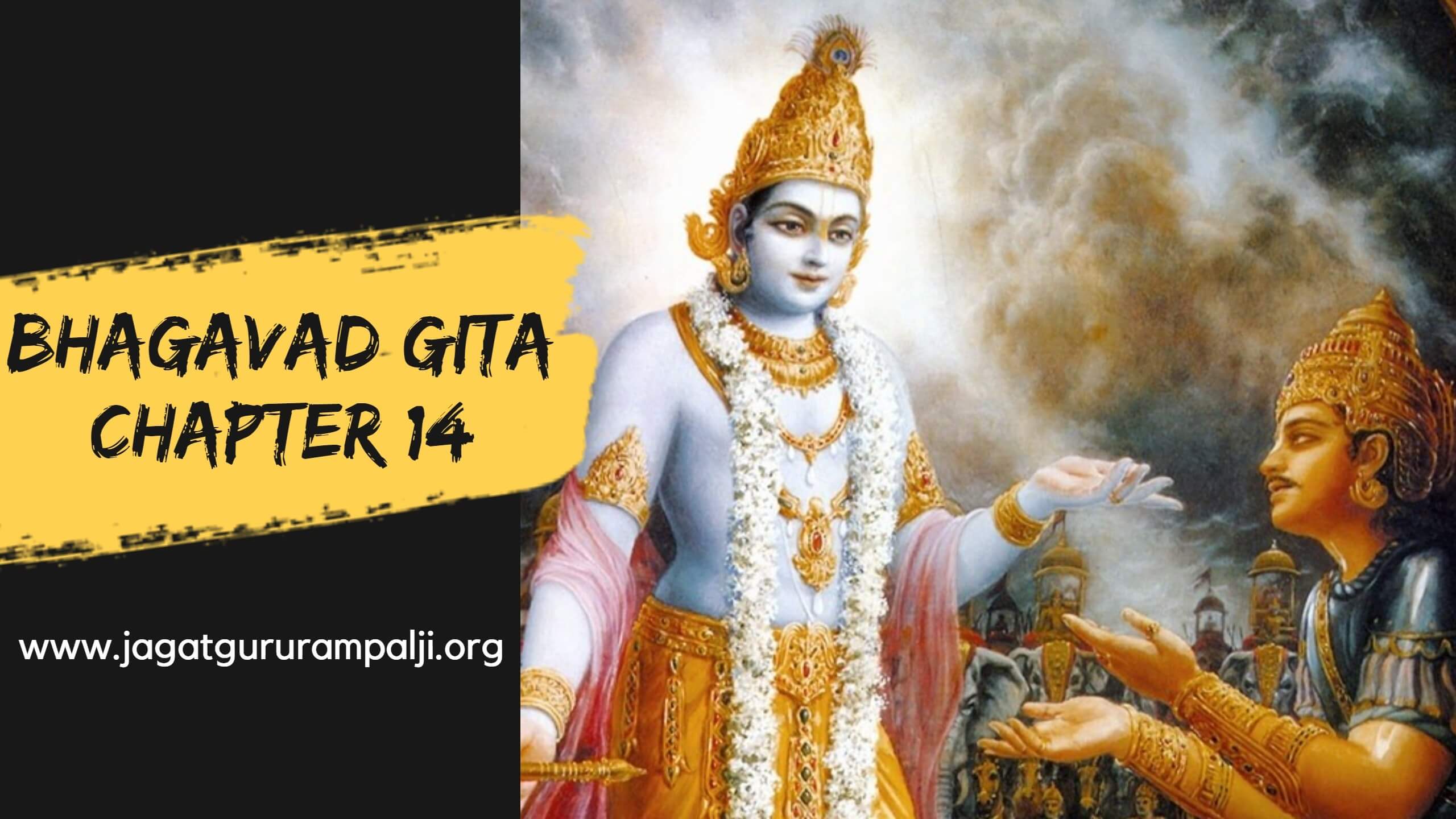 In Bhagavad Gita Chapter 14, the most important information about production of all living beings including Brahma, Vishnu and Shiv from Brahm (Kaal) and Durga has been given. Further in Chapter 14 of Bhagavad Gita it has been explained what one achieves by worshipping Rajogun, Satgun and Tamgun.

Chapter 14 Verse 1: I shall again state that supreme knowledge, the best among all knowledge, knowing which all the sages by being liberated from this world have attained the supreme achievement / salvation / spiritual success (siddhi).

Chapter 14 Verse 2: By taking refuge of i.e. following this knowledge, the devotees who have acquired qualities like mine are not born in the beginning of creation and are also not disturbed at the time of destruction.

Chapter 14 Verse 4: O Arjun! Whatever embodied beings are born in all the wombs, the Primeval Prakriti is their mother who conceives them and I, Brahm-Kaal, am the seed-giving father.

Chapter 14 Verse 7: O Arjun! Know the passion-like Rajogun to be born of desire and attachment. It binds this soul to attachment with actions and their fruits.

Chapter 14 Verse 8: O Arjun! Know the Tamogun which deludes all the embodied beings to be born of ignorance. It binds this soul to wrongdoing, laziness and sleep.

Chapter 14 Verse 11: When in this body and in the inner-self and in the senses, consciousness and discernment arise, at that time this should be known that Satvgun is predominating.

Chapter 14 Verse 12: O Arjun! When Rajogun becomes predominant, all these arise – greedy nature with selfish mind, commencement of actions with desire of fruits, restlessness and craving for worldly pleasures.

Chapter 14 Verse 13: O Arjun! When Tamogun predominates, all of these only arise – darkness/lack of discrimination in the inner-self and senses, lack of inclination towards performance of duties, and futile efforts and sleep etc deluding instincts of inner-self.

Chapter 14 Verse 14: When one meets death while Satvgun is predominant, then he attains the pure and divine heaven-like loks/worlds of those who perform good deeds.

Chapter 14 Verse 17: From Satvgun, arises knowledge and from Rajogun undoubtedly greed and from Tamogun arise wrongdoing and delusion and also ignorance.

Chapter 14 Verse 20: That soul transcending these three gunas i.e. the three, Rajogun- Brahma Ji, Satgun-Vishnu Ji, and Tamgun-Shiv Ji, that are the causes of the production of body, and by doing scripture-based worship of the Supreme God, becoming free from birth, death, old age and all forms of miseries, attains the supreme happiness i.e. eternity on becoming completely liberated.

Chapter 14 Verse 23: One, who is withdrawn from the enjoyment of all substances i.e. is situated like a witness, can not be disturbed by the gunas, and understanding that the gunas (Rajgun-Brahma, Satgun-Vishnu and Tamgun-Shiv) only operate in the gunas (Rajgun, Satgun and Tamgun), who remains exclusively situated in the Sachchidanandghan[1] Parmatma[2] and is never wavered from that state.

Chapter 14 Verse 24: Based on one’s Tatvagyan, who considers joy and sorrow as same, who looks equally upon mud, stone and gold, a Tatvagyani i.e. knowledgeable person who considers pleasant and unpleasant to be same and remains balanced in his criticism and praise.

Chapter 14 Verse 25: He who is balanced in honour and dishonour, is equal to a friend and a foe, and who renounces all endeavours to benefit someone out of love and cause damage to someone out of hatred, that devotee is said to have transcended the gunas i.e. he is not affected by the invisible power of the three gods (Rajgun-Brahma, Satgun-Vishnu and Tamgun-Shiv ji).

Chapter 14 Verse 26: And a devotee who constantly worships me through unadulterous bhakti yog, he too transcending these three gunas becomes worthy of attaining the Sachchidanandghan Brahm i.e. only desires for that one Purna Parmatma.

Chapter 14 Verse 27: Because I am the (first) stage i.e. introduction of that immortal Supreme God, and of the nectar, and of the eternal worship and of the absolute bliss i.e. that God is also attained through me.