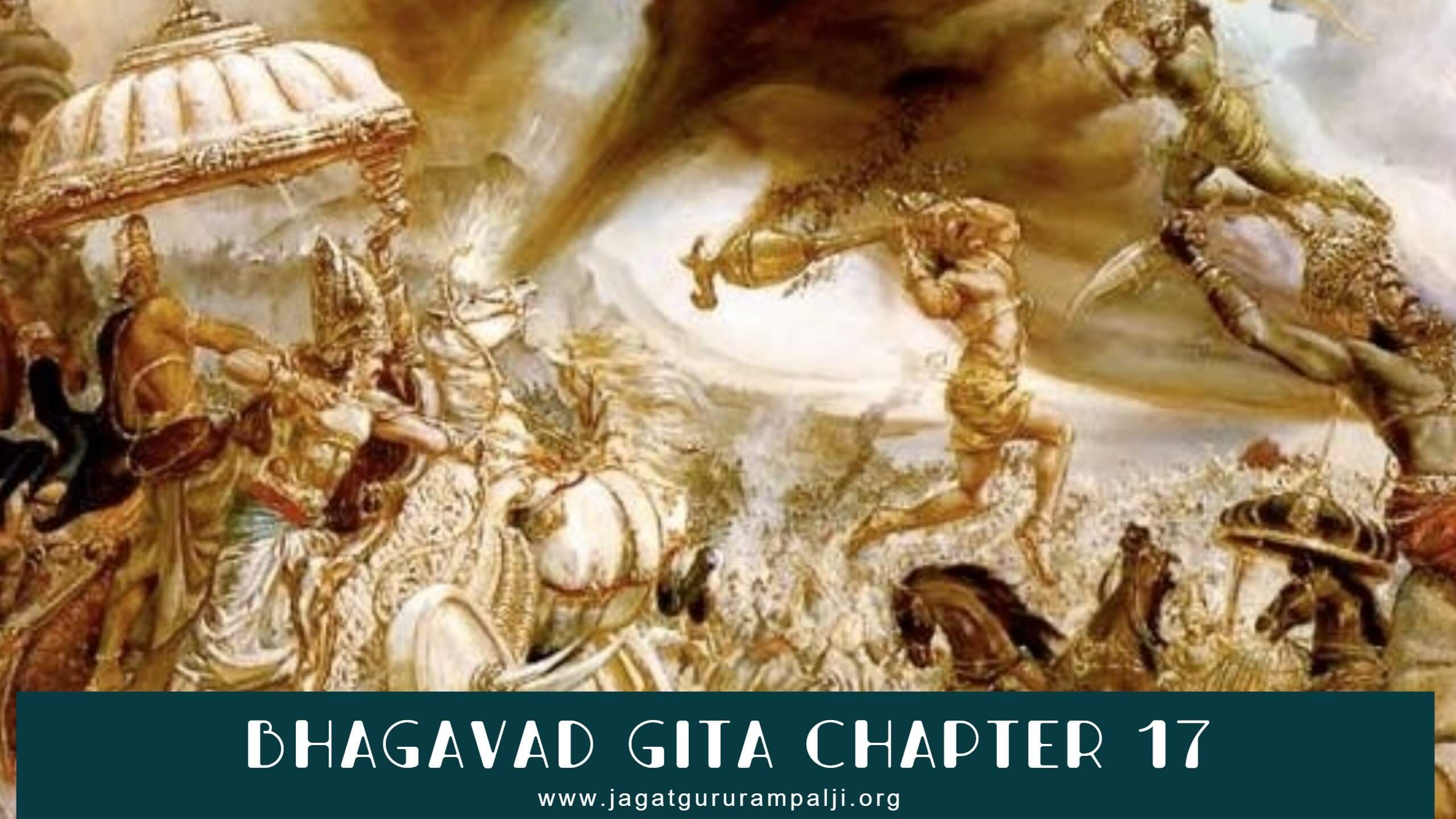 In Bhagavad Gita Chapter 17, Arjun asked that, oh Lord! What is the nature of those who do sadhna abandoning the ordinances of the scriptures i.e. who worship the three gunas (Rajgun-Brahma Ji, Satgun-Vishnu Ji, and Tamgun-Shiv Ji) and even those lower than these, ghosts-pitras, yagya, Bhairav etc?

Chapter 17 Verse 1: O Krishna! Those who, abandoning the ordinances of the scriptures, worship the demigods etc with faith, what is their state then, Satvik, Rajsi or Tamsi?

Chapter 17 Verse 2: That faith of the men, born of their nature, is of three types only – Satviki and Rajsi and Tamsi. Hear about that snare of darkness of ignorance.

Chapter 17 Verse 3: O Bharat! Everyone’s faith is in accordance with their inner-self. This person is filled with faith, therefore, whatever faith one has, he himself is actually that only.

Chapter 17 Verse 4: Satvik men worship gods like, Shri Brahma Ji, Shri Vishnu Ji and Shri Shiv Ji etc. Rajas men worship yakshas and demons, and the others who are Tamas men, they worship spirits and ghosts and also chiefly regard Shri Shiv Ji as their deity.

Chapter 17 Verse 5: Those men who only practice arbitrary severe austerity which is not enjoined by the scriptures and are equipped with hypocrisy and arrogance and with attachment to desire and pride of the power of bhakti.

Chapter 17 Verse 6: The ignorants, who torture the chiefs of the living beings – Brahma, Vishnu , Shiv, Ganesh, Prakriti and me dwelling in the body and the Purna Parmatma dwelling with the living being in the heart lotus of the body, know them to be of demoniac nature only.

Chapter 17 Verse 7: The food also, which is dear to everyone according to their nature, is of three types. Therefore, in a similar manner, yagya, austerity and charity are also of three types each. Hear this distinction of them from me.

Chapter 17 Verse 8: Foods i.e. edible substances which promote age, intellect, strength, health, happiness and love, which are juicy, oily and which are lasting and which are dear to mind by nature only, are liked by those dominated by Satogun i.e. the worshippers of Vishnu whose revered deity is Vishnu.

Chapter 17 Verse 9: Foods which are bitter, sour, salty, excessively hot, spicy, dry, burning and which give rise to misery, worries and disease are liked by Rajas people, Rajogun-dominated i.e. whose revered deity is Brahma; because Hrinakashipu had worshipped Brahma.

Chapter 17 Verse 10: The food which is half-cooked, tasteless, foul-smelling, stale and is leftover and which is also impure is dear to the Tamas man. The revered deity of those who are dominated by Tamogun is Shiv, and they worship ghosts and spirits who are of a lower level. They like the above-mentioned food.

Chapter 17 Verse 11: It is a duty to only perform yagya directed by the injunctions of the scriptures – with such resolution of mind a yagya, which is performed by those who do not desire for the results, is Satvik.

Chapter 17 Verse 12: But O Arjun! A yagya which is performed only for the sake of pretention and also keeping in view the reward, know that yagya i.e. religious rite, which takes one to dark hell, as Rajas.

Chapter 17 Verse 13: A yagya i.e. religious rite which is contrary to the scriptural injunctions, in which no food is distributed, which is performed without actual mantras, without giving gifts, without obtaining initiation and without faith is said to be Tamas yagya.

Chapter 17 Verse 14: Respect of persons with divine nature i.e. saints, Brahmins, Guru and learned persons, purity, submissiveness, celibacy, and non-violence, this is said to be austerity related to the body. But all this is contrary to scriptural injunctions and because of which is useless religious practice. Because in Gita Gita Chapter 16 Verse 23-24, to act arbitrarily abandoning the scriptural injunctions has been described as useless.

Chapter 17 Verse 15: That which does not cause agitation, is pleasing and beneficial, and is true speech, and study of religious texts, and the practice of the jaap of the mantra of God only is said to be the austerity related to speech.

Chapter 17 Verse 16: Happiness of mind, calmness, apart from discussion about God, silence in worldly talks, restraint of every thought and purity in feelings; thus, this is said to be austerity related to mind.

Chapter 17 Verse 17: That above-mentioned austerity of three types, practiced with utmost faith by men engrossed in bhakti according to the scriptural injunctions who are not desirous of rewards, is said to be Satvik.

Chapter 17 Verse 18: The austerity, which is practised only for veneration in form of respect and honour, and with hypocrisy, that transient destructible austerity is called Rajas here.

Chapter 17 Verse 19: The austerity which is practised foolishly with stubbornness by inflicting pain to mind, speech and body, or to cause harm to others, that austerity is said to be Tamas. {Its evidence is also in Gita Gita Chapter 3 Verse 6.}

Chapter 17 Verse 20: It is a duty to do charity. A charity which is given with this belief on finding the situation and time and a person worthy of being given charity without any desire for reward in its return, that charity is said to be Satvik.

Chapter 17 Verse 21: But a charity which is given for receiving benefit in return or with the aim of getting reward and with dissension i.e. with an unhappy mind on giving donation, that charity is said to be Rajas.

Chapter 17 Verse 22: A charity which is given by violating the orders of the Guru, by disrespecting him and at an inappropriate time, situation, to an unworthy recipient instead of a Purna Guru[2], that charity is said to be Tamas.

Chapter 17 Verse 24: Therefore, the acts of yagya, charity and austerity and sumiran of those, who pray to God and those who advise rituals which are in accordance with the scriptural injunctions, always commence by chanting this mantra Om’ only; i.e. in the jaap of the three mantras, commencement is from Om’ mantra through breath.

Chapter 17 Verse 25: The breath iti i.e. ends on the jaap of Tat’ mantra of Akshar Purush i.e. ParBrahm, and is done by those men who perform various kinds of activities of yagya, austerity and charity without desiring the fruit and with the desire of attaining well-being i.e. by those who only wish to become completely free from the cycle of birth and death. This Tat’ mantra is ‘SOM’ mantra, which is jaap mantra of ParBrahm and in the jaap of Satnaam through breaths, the breath iti i.e. ends on the Tat’ mantra.

Chapter 17 Verse 26: ‘Sat’’- this Saarnaam is used in true sense and in supreme sense at the end of Tat’ mantra with the name of this very Purna Parmatma, and O Paarth, Sat’ Shabd i.e. Saarnaam is only used in a superior act; i.e. is added at the end of the aforesaid two mantras Om’ and Tat’.

Chapter 17 Verse 27: And the state in yagya, austerity and charity is also said to be ‘Sat’’, and in the scripture-based act of bhakti done for that Supreme God only, another word is said at the end of Sat’ word by a Tatvdarshi Saint. For example, Sat’ Sahib, Satguru, Sat’ Purush, Satlok, Satnaam etc words are said.

Chapter 17 Verse 28: O Arjun! Without faith, a hawan performed, a charity given and an austerity practiced and whatever auspicious act is performed, all of that is ‘Asat’’ i.e. is useless – it is said so. Therefore, it is neither beneficial for us in this world nor after death.