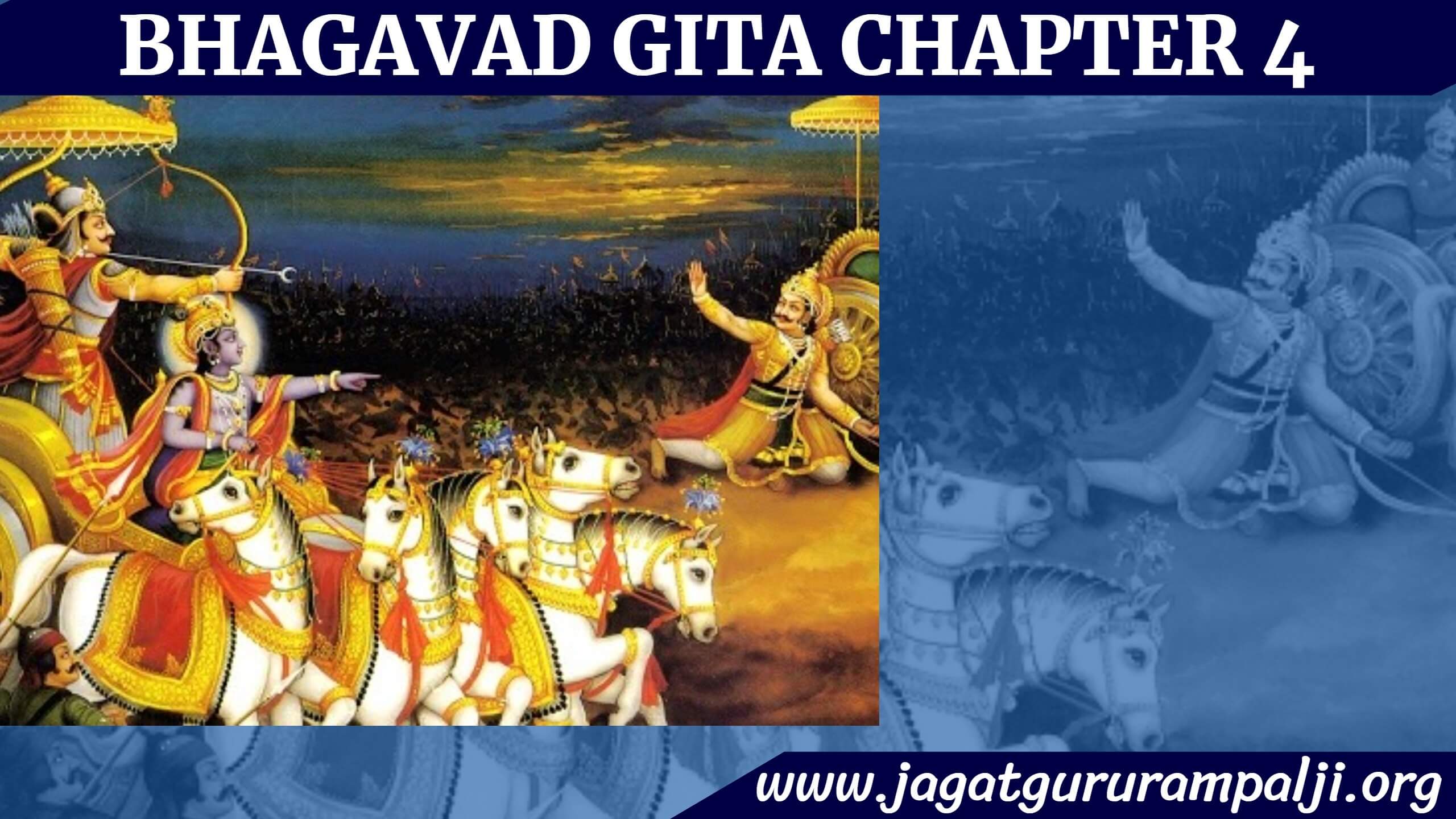 In Bhagavad Gita Chapter 4, it has been said that birth and death do not end with the worship of Kaal or Brahm. Actions and Sins cannot be eliminated by the way of worship mentioned in Vedas and Bhagavad Gita. Complete Liberation is only possible after taking the shelter of a Tatvadarshi Saint.

Chapter 4 Verse 2: O Parantap Arjun! This is how the royal sages learnt about this way of bhakti handed down in regular succession. But thereafter that yog i.e. way of bhakti due to long lapse of time became lost in this world.

Chapter 4 Verse 3: You are my devotee as well as friend. Therefore I have said that same this ancient, old and actual way of bhakti to you because this is a supreme secret i.e this matter is worthy of being kept a secret.

Chapter 4 Verse 4: Your birth is not of a long time i.e. is recent and Surya’s birth is of a very early time. How shall I understand this that you only had said this yog to Surya at the beginning of the age?

Chapter 4 Verse 5: O Parantap Arjun! You and I have had several births. You do not know all of them but I know.

Chapter 4 Verse 6: I, who does not take birth like human beings and also being the immortal soul and also being the Lord of the living beings of my 21 brahmands, by subjugating my Prakriti, Durga i.e. by keeping her as my wife, give rise to my parts i.e. sons, Shri Brahma Ji, Shri Vishnu Ji and Shri Shiv Ji; then make them appear as incarnations like Shri Krishna, Shri Ram, Shri Parsuram etc.

Chapter 4 Verse 7: O Bharat! Whenever there is a decline of righteousness and rise of unrighteousness, then only I create my partial incarnation.

Chapter 4 Verse 8: To protect the saintly men, to destroy the wicked, and to give the path of bhakti a scripture-based direction, I manifest my parts from age to age and by secretively entering into them I perform my divine play.

Chapter 4 Verse 9: O Arjun! My births and actions are divine i.e. transcendental. Thus one who understands this in essence, he on abandoning the body does not take birth again, but one who does not know me, Kaal, in essence, comes to me only.

Chapter 4 Verse 10: Those whose love, fear and anger have become completely destroyed and who remain focussed in me with exclusive love, many such devotees, who are dependant on me, being purified by the austerity of above-mentioned knowledge, have become matavlambi i.e. of the nature of doing worship according to the scriptures.

Chapter 4 Verse 11: O Arjun! In whichever way the devotees who worship me, I also worship them in the same way i.e. take full care of them. In reality all the human beings follow my behaviour only in all respects.

Chapter 4 Verse 12: In this world of men those who desire for the fruits of actions, they worship the gods i.e. Brahma, Vishnu, Shiv because they quickly attain the spiritual success arising from their actions i.e. based on their actions.

Chapter 4 Verse 13: The group of the four varnas/castes, Brahmin, Kshatriya, Vaishya, and Shoodr, has been formed by me based on the division of qualities and actions. Thus consider me, Kaal, only to be the doer of that action. That eternal God is a non-doer.

Chapter 4 Verse 14: I have no desire for the fruits of actions therefore actions do not smear me. Thus one who understands me, Kaal-Brahm, in essence, he also is not bound to the actions i.e. on finding the Tatvdarshi saint mentioned in Gita Gita Chapter 4 Verse 34, by going in the refuge of that God mentioned in Gita Gita Chapter 18 Verse 62, and by doing bhakti of the Supreme God/Purna Parmatma, becomes free from the bondage of actions.

Chapter 4 Verse 15: Even the seekers of salvation of the ancient times, after knowing in this way only, have performed the acts of scripture-based sadhna with great passion. Therefore you also perform the scripture-based acts of bhakti as always performed by the ancestors.

Chapter 4 Verse 16: What is action and what is inaction? Thus even the wise devotees become bewildered in making a decision here. Therefore I will properly explain that essence of action to you, knowing which you will become liberated from the evil actions performed in opposition to the scriptures.

Chapter 4 Verse 19: He whose all scripture-based actions are devoid of desires and resolutions and the evil actions i.e. the actions opposite to the ordinances of scriptures have been turned to ashes by the fire of Tatvgyan i.e. on acquiring full knowledge the worshipper on finding a complete saint obtains the real mantra by which all sins are destroyed, wise men, who worship according to the ordinances of scriptures, call him a Pandit.

Chapter 4 Verse 21: A soul equipped with scripture-based bhakti who has abandoned all the cumulated sadhnas which are contrary to the scriptures, such a bhakt who has given up baseless sadhna i.e. has abandoned sadhna contrary to the injunctions of scriptures, he instead of just doing hathyog, while performing the sadhna which is easily performed by the body, the worldly actions and scripture-based acts of bhakti related to body does not incur sin. Because in Gita Chapter 7 Verse 12 to 15 the people who, abandoning the ordinances of the scriptures, follow arbitrary way of worship, are said to be of demoniac nature, the lowest among men and evil-doers i.e. abandoning the injunctions of scriptures, following arbitrary behaviour, fools who do not worship me, they by only worshipping the three gunas i.e. Rajgun Brahma Ji, Satgun Vishnu Ji, Tamgun Shiv Ji remain dependant on the short-lived relief obtained from them. The worship of these three gunas i.e. Shri Brahma Ji, Shri Vishnu Ji, Shri Shiv Ji, only is said to be contrary to the scriptures. Abandoning this scripture-opposed way of worship does scripture-based bhakti. This evidence is also in Gita Chapter 18 Verse 47-48.

Chapter 4 Verse 22: One, who aways remains satisfied in a naturally obtained thing which is not desired for, in whom there is a complete absence of jealousy, and who has become completely free from the conflicts of joy-sorrow etc, who remains same i.e. undeviated in the success and failure of a task, he even while doing scripture-based bhakti besides doing work does not get bound to them. Because after obtaining jaap of a complete mantra from a Complete Saint, the auspicious acts of scripture-based sadhna, which are performed without any desire, are helpful in bhakti and the sins are destroyed. As a result of which one becomes free from the bondage of actions.

Chapter 4 Verse 23: Because of losing faith in scripture-opposed way of worship, the mind of that liberated devotee always remains situated in the True spiritual knowledge of God. All the actions of such a person, who performs actions for the scripture-based bhakti, become dissolved in worship of God.

Chapter 4 Verse 24: Even the dedication of such a devotee who is in accord with the scriptures is towards Brahm i.e. God and the sacrificial substances are also God only and in Brahm-like fire dedicated to the Supreme God i.e. by praying to God, sins are sacrificed i.e. sins are destroyed. In reality, even while doing worldly tasks, one whose mind is engrossed in God only and who performs actions which are easily done by the body i.e. who does sadhna by being in Sahaj Samadhi, for him, God is worthy of being attained i.e. he only can attain God who remains in Sahaj Samadhi.

Chapter 4 Verse 25: Contrary to this, other yogis/devotees properly perform yagya in the form of worship of gods only and other yogis with the fire of separation to attain God observe religious actions through arbitrary religious practices only.

Chapter 4 Verse 29-30: Others try to sacrifice incoming breath into outgoing breath to burn sins. Likewise, sacrifice the outgoing breath into the incoming breath, and many others, who eat in moderation, devoted to breath control, by restraining the movement of the incoming and the outgoing breath, and by making their life-breaths minute try to burn them in the life-breaths only in the form of sacrifice i.e. try to attain God by doing Praanyam. All these devotees consider the above-mentioned religious acts i.e. sadhnas to be the means of bhakti which destroy sins. In other words consider this very sadhna to be the path to salvation.

Chapter 4 Verse 31: O best of Kurus, Arjun! The wise worshippers saved from the above-mentioned scripture-opposed religious practices by enjoying the benefit left from the scripture-based worship attain Aadi Purush Parmeshwar i.e. Purna Brahm, and for a man, who does not do bhakti of the Supreme God according to the injunctions of scriptures, even this world of men is not happiness-giving, then how can the other world be happiness-giving?

Chapter 4 Verse 32: There are various types of scripture-based religious activities like this. You may know them all as yagyas being performed through actions. In this way they have been elaborately explained in the fifth Ved i.e. Swasam Ved by the Supreme God through His lotus-mouth. Knowing this you will become completely liberated.

Chapter 4 Verse 33: O Parantap Arjun! Compared to the yagyas i.e. religious actions like charity, provision of meals etc which are performed with money, the yagya of knowledge is much superior, and all the scripture-based actions in their entirety culminate in Tatvgyan/ the True Spiritual Knowledge.

Chapter 4 Verse 34: God, the narrator of the Holy Gita, is saying that the various types of above-mentioned sadhnas are arbitrary practices. It is a hypothetical knowledge of sadhna upto my level but even I do not know the path of complete liberation of the Supreme God. Regarding that it is said in this mantra 34 that understand that Tatvgyan. By properly prostrating before those saints who know the true knowledge and solution of the Supreme God, by serving them, and by giving up deceit, asking questions with simplicity, they, who know the Supreme God in essence i.e. Tatvdarshi, knowledgeable Mahatmas, will instruct you in Tatvgyan/True Spiritual Knowledge. Its evidence is also in Gita Gita Chapter 2 Verse 15-16.

Chapter 4 Verse 35: The true spiritual knowledge knowing which then you will not be deluded in this way, and O Arjun! The knowledge by which you will see all the living beings in the Supreme God who lives inseparably with the soul, and later me that I am Kaal; you will come to know this.

Chapter 4 Verse 36: Even if you are the most sinful of all other sinners, then also on knowing everything on the basis of Tatvgyan crossing ignorance by the boat of real naam, you will undoubtedly completely get through i.e. after becoming sin-free you will become fully liberated.

Chapter 4 Verse 38: Undoubtedly there does not seem to be anything purifying like the Tatvgyan/true spiritual knowledge in this world. By the true path of bhakti given by that Tatvdarshi saint, one whose bhakti earnings have become complete, he, according to the time, automatically attains that Supreme God who lives inseparably with the soul on the basis of the account mentioned in Gita Gita Chapter 8 Verse 8 to 10.

Chapter 4 Verse 39: A reverential person, who has won over his senses, devoted to the sadhna obtained from that Tatvdarshi saint, on obtaining bhakti gains the Tatvgyan of the Supreme God, and after gaining Tatvgyan, he without any delay, soon attains the Supreme Peace in the form of attainment of God.

Chapter 4 Verse 40: A devotee who distrusts the knowledge and sadhna of that Tatvdarshi saint, that undiscerning, faithless and sceptical person definitely becomes deviated from the path of bhakti. For such a sceptical person neither is there any happiness in this world, nor the other world. Its evidence is also in Gita Gita Chapter 6 Verse 40.

Chapter 4 Verse 42: Therefore, O Bharatvanshi Arjun! Slashing the sin of baseless doubt in your heart, which is born of ignorance, with the sword of Tatvgyan i.e. sifting milk and water, stand up i.e. become alert and from the inner soul, become steady in the scripture-based bhakti of the Supreme God.