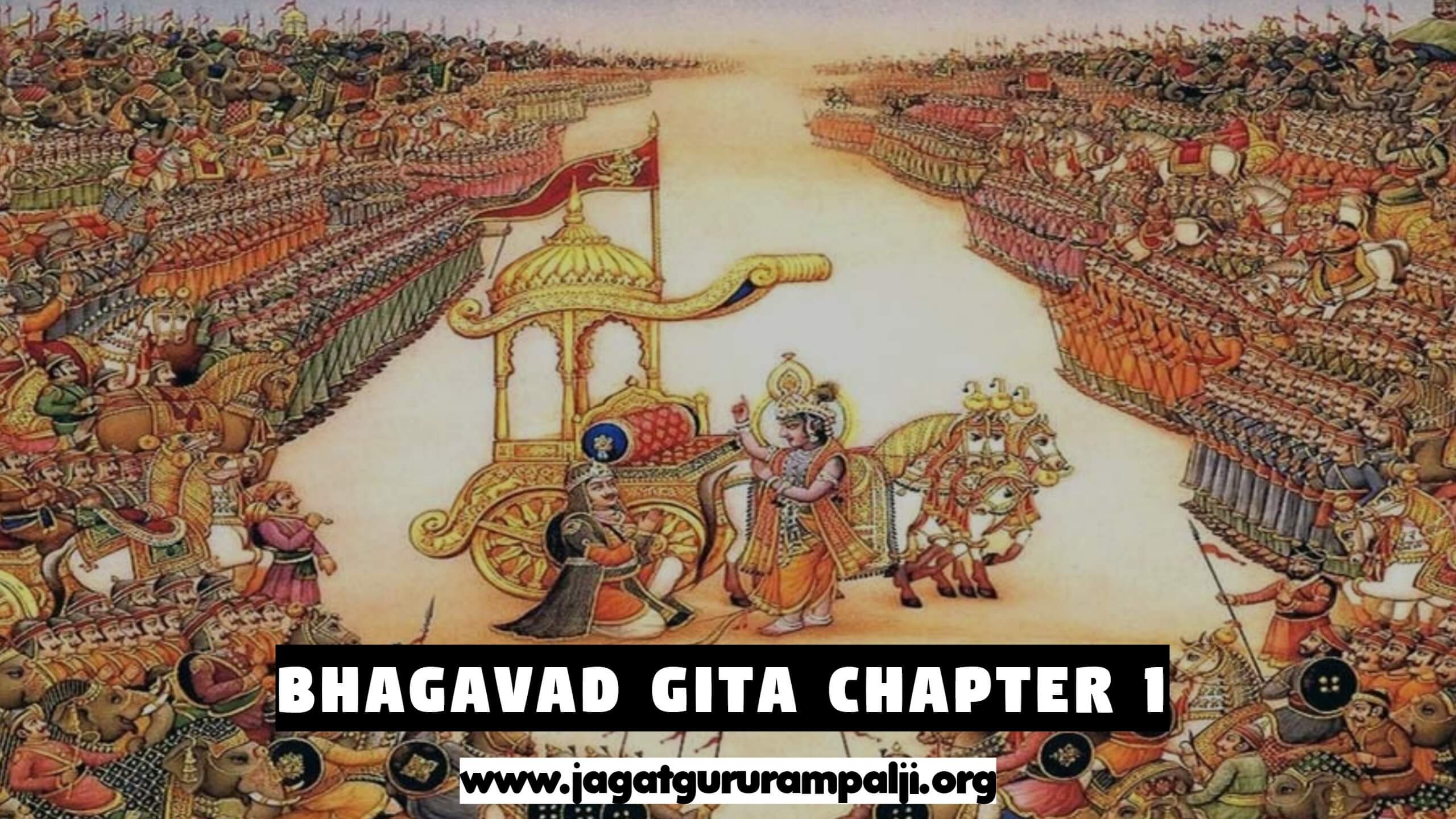 Chapter 1 Verse 1: O Sanjay! In the field of law, Kurukshetra, assembled with the desire to fight, what did my and here pandu’s sons did?

Chapter 1 Verse 2: At that time, King Duryodhan, on seeing the array of army of the Pandavas, and after approaching Dronacharya, spoke these words.

Chapter 1 Verse 4-5-6: In this army, mighty archers and equivalent to Bheem and Arjun in fight – heroes Satyaki and Viraat, and great chariot-warriors – King Drupad, Dhrishtketu and Chekitan and powerful Kashiraj Purujit, Kuntibhoj and best among men – Shaibya, mighty Yudhamanyu and powerful Uttamauja, Subhadra’s son, Abhimanyu and Draupadi’s five sons, - all these great chariot-warriors are there.

Chapter 1 Verse 7: O greatest Brahman! Know those who are chief on our side. For your information I will tell you about those who are the commanders of my army.

Chapter 1 Verse 8: Yourself (Dronacharya) and grandfather Bheeshm, and Karn and victor in battle Kripacharya, and similarly, Ashwatthama, Vikarn, and Saumdat’s son, Bhoorishrwa.

Chapter 1 Verse 9: There are also many other heroes, who are ready to give up their lives for my sake; they are equipped with many kinds of weapons and all of them are skilled in the strategy of warfare.

Chapter 1 Verse 10: That army of ours guarded by Bheeshm pitamah is invincible in every manner, and this army of these people guarded by Bheem is easily conquerable.

Chapter 1 Verse 11: Therefore, by being stationed in your respective positions on all battlefronts, all of you must guard Bheeshm Pitamah in particular, from all directions.

Chapter 1 Verse 12: The oldest among Kauravs, highly valiant Bheeshm Pitamah very loudly blew a conchshell, making a sound like the roar of a lion giving rise to joy in Duryodhan’s heart.

Chapter 1 Verse 13: After that, conchshells and kettledrums and tabors, drums, and horns etc instruments all blared forth at once. Their that sound became tumultuous.

Chapter 1 Verse 17-18: The great archer, Kashiraj, and the great chariot–warrior, Shikhandi and Dhrishtdhyumn and King Viraat, and the invincible Satyaki, King Drupad, and Draupadi’s five sons and mighty-armed Subhadra’s son Abhimanyu, all of these, O King, blew their separate-separate conchshells from all directions.

Chapter 1 Verse 19: And that tumultuous sound, resounding in sky as well as Earth, pierced hearts of Dhritrashtr’s i.e. of those on your side.

Chapter 1 Verse 20-21: O King! After this, Kapidhvaj Arjun, seeing Dhritrashtr’s relatives, standing arrayed on battle fronts, at the time of shooting of weapons, lifting bow, said this statement to Hrishikesh Shri Krishna Maharaj – O Achyut! Park my chariot in the middle of the two armies.

Chapter 1 Verse 22: Until I can adequately see these warriors of opposition standing in the battlefield, desirous of war that in this battle-like trade, with whom should I fight.

Chapter 1 Verse 23: These kings, who have come in this army, who are well-wishers of Dhritrashtr’s evil-minded son Duryodhan, I shall see these fighters.

Chapter 1 Verse 24-25: O Dhritrashtr! Thus addressed by Arjun, Maharaj Shri Krishnachandra having placed the magnificent chariot in the middle of the two armies in front of Bheeshm and Dronacharya and in front of all the kings, thus said that O Paarth! Behold these Kauravs assembled to fight.

Chapter 1 Verse 26-27: After this son of Prtha, Arjun, beheld paternal uncles, grandfathers–great grand fathers, teachers, maternal uncles, brothers, sons, grandsons and friends, father-in-laws and also well-wishers, stationed in both of those armies. On seeing all those relatives present there, that Kunti’s son Arjun.

Chapter 1 Verse 28: Filled with great compassion, while grieving spoke these words, “O Krishna! Seeing these kinfolk positioned in the battlefield, desirous of war.”

Chapter 1 Verse 29: My limbs are becoming feeble and mouth is drying up and my body is quivering and hair are standing on end.

Chapter 1 Verse 30: Gandeev bow is slipping from my hand, and skin is also burning a lot, and my mind seems to reel. Therefore, I am not even able to stand.

Chapter 1 Verse 31: O Keshav! The preindications also seem to be inverse only to me and also do not perceive welfare by killing kinfolk in the battle.

Chapter 1 Verse 32: O Krishna! Neither do I desire for victory, and nor kingdom, and nor pleasures. O Govind! What is the use of such kingdom to us, and what is the benefit from such luxuries and even from life itself?

Chapter 1 Verse 33: For whose sake, we desire for kingdom, worldly enjoyments, and pleasures etc, they only are standing in the battle, giving up the desire for wealth and life.

Chapter 1 Verse 35: O Madhusudan! I do not want to kill all of these even if they kill me or even for the kingdom of the three (loks) worlds, then not to mention for the Earth.

Chapter 1 Verse 36: O Janardan! What happiness will we get by killing Dhritrashtr’s sons? We will only accrue sin by killing these desperedoes.

Chapter 1 Verse 41: O Krishna! With the upsurge of sin, the women of the family become extremely corrupt and O Vashrney! When the women become corrupt, offsprings of mixed castes are born.

Chapter 1 Verse 42: Mixture of castes is responsible for taking the destroyer of the family and the family itself to hell. From the secret act of bodily pleasure, their descendents from the male-female’s seminal fluid and seed also decline.

Chapter 1 Verse 43: By these evil deeds of the destroyers of the family, that give rise to mixed castes, the ancient laws of family and the laws of community become destroyed.

Chapter 1 Verse 44: O Janardan! Those whose law of familiy has become destroyed, such men dwell in hell for indefinite time. We have heard so.

Chapter 1 Verse 46: If the sons of Dhritrashtr, with weapons in hand, kill the unarmed and unresisting me, in the battle, then that death would also be better for me.

Chapter 1 Verse 47: In the battlefield, having spoken thus, Arjun with his mind perturbed with grief, cast aside bow and arrows and sat down on the rear end of the chariot.