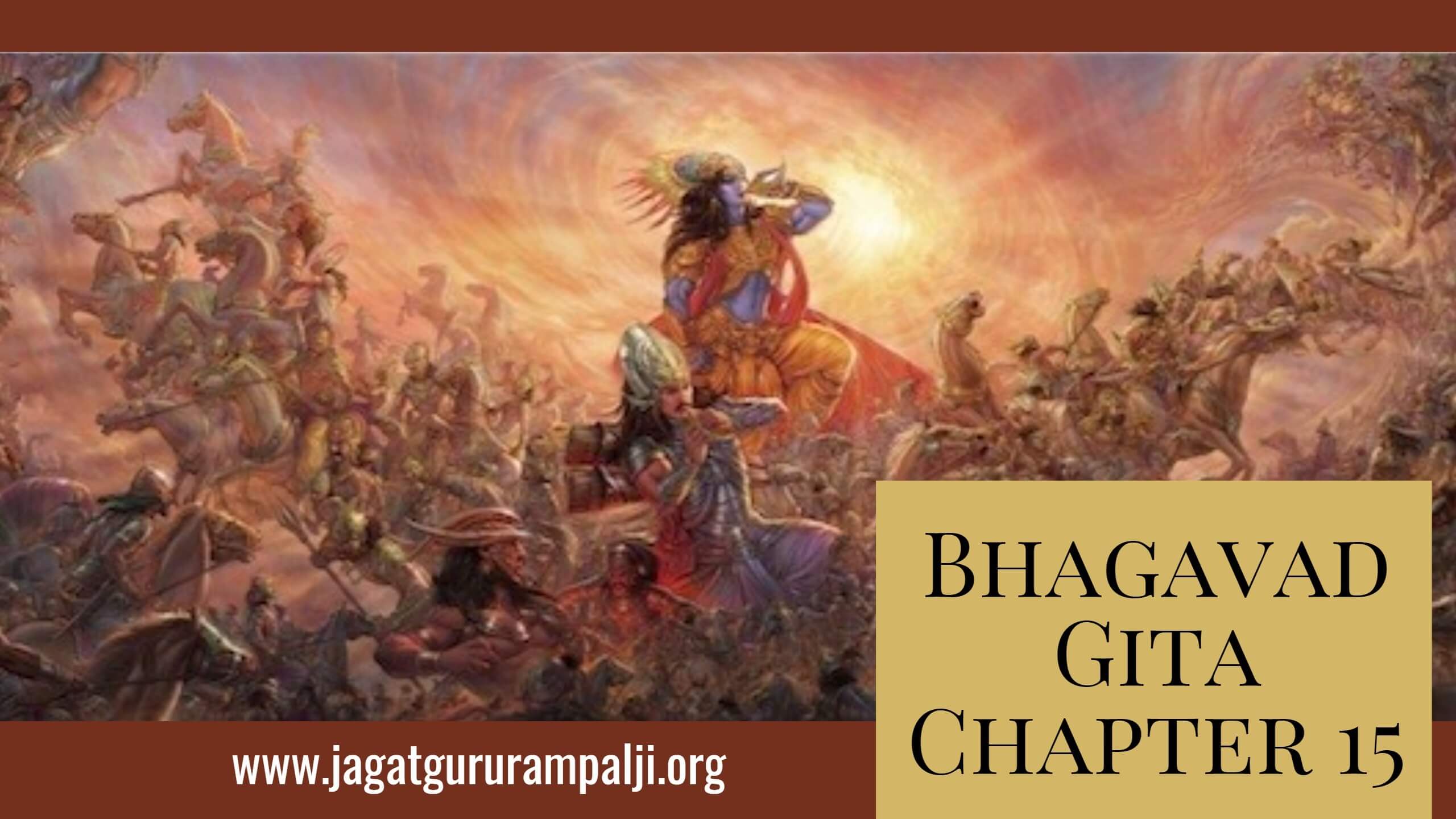 In Bhagavad Gita Chapter 15, the description of inverted tree of the world has been explained. The knowledge about the trunk, branches and leaves of that tree has been given and its state has been elaborated in Bhagavad Gita.

Chapter 15 Verse 1: With the roots above in the form of Purna Parmatma Aadi Purush Parmeshwar and the branches below in the form of the three gunas i.e. Rajgun-Brahma, Satgun-Vishnu and Tamgun-Shiv, it is an imperishable, extensive Pipal tree, whose divisions, small-small parts, just as there are verses in Vedas, are said to be twigs and leaves. One, who knows that tree of world in detail, is completely knowledgeable i.e. is Tatvadarshi.

Chapter 15 Verse 2: That tree’s three gunas–(Rajgun-Brahma, Satgun-Vishnu, Tamgun-Shiv)–like defects (lust, anger, attachment, greed, arrogance) in the form of shoots and branches – Brahma, Vishnu and Shiv, extended below and above, are the root cause of binding the soul to actions, and in the world of men – Heaven, Hell and Earth, have been arranged below – in hell, 84 lakh births and above in heaven etc.

Chapter 15 Verse 3: Neither does this creation have a beginning, nor an end, nor is such a form perceived, and here in this discussion i.e. in the knowledge of Gita being imparted by me, even I do not have full information because even I do not adequately know the state of the creation of all the brahmands. With this determined weapon of unsmeared Tatvgyan i.e. pure Tatvgyan which has a strong form and a permanent state, cutting down i.e. considering the bhakti of Niranjan to be short-lived.

Chapter 15 Verse 4: {When one finds the Tatvdarshi saint mentioned in Gita Gita Chapter 4 Verse 34, Gita Chapter 15 Verse 1} after that one should properly search for the supreme place i.e. Satlok of that Supreme God. Having gone where, devotees do not return to the world, and the Param Akshar Brahm, from whom the ancient creation–nature has originated. I also am in the refuge of that Eternal Purna Parmatma. One should only do bhajan of that Supreme God with full determination.

Chapter 15 Verse 5: Wise men whose pride and affection have become destroyed, attachment has become destroyed, who remain engrossed in the Purna Parmatma all the time, devoid of desires, properly free from the darkness of joys-sorrows, go to that eternal Satlok.

Chapter 15 Verse 6: Having gone where, do not return to the world; neither the sun can illuminate that place, nor the moon, nor fire. That Satlok is superior to my lok. The other translators of Gita ji have written that “That is my supreme abode”. Even if we consider this, then this speaker of Gita, Brahm, has been expelled from Satyalok i.e. supreme abode. Therefore, has said that even my supreme abode is that only and it is superior to my lok; having gone where one does not return to birth-death. Therefore, in Gita Chapter 15 Verse 4 has said that I am in the refuge of that same Primeval Supreme God.

Chapter 15 Verse 7: In the mortal world, soul, the part of the Primordial Supreme God, only is tortured through attraction by these six, my mind {man (mind) the second form of Kaal is mind} and the five senses situated in Prakriti.

Chapter 15 Verse 8: Wind carries the smell because wind is the master of smell; similarly, the Almighty God also takes the soul along with these five senses and mind by acquiring an immaterial body, from the old body which the soul abandons to the new body which it attains, based on destiny. It is also evident in Gita Gita Chapter 18 Verse 61.

Chapter 15 Verse 9: This soul, a part of God, enjoys the sense objects i.e. sound, touch, form, taste, smell etc by means of ears, eyes, and skin, and tongue, nose and mind only. Then the soul itself has to experience the results of those actions.

Chapter 15 Verse 10: Ignorant people do not even see i.e. know the God, residing inseparably with the soul who has these gunas/qualities, while leaving the body at the time of death or while dwelling in the body or while experiencing. Those who have the eyes of knowledge i.e. the completely knowledgeable persons know. Its evidence is also in Gita Gita Chapter 2 Verse 12 to 23.

Chapter 15 Verse 11: The striving yogis (devotees) see this God situated in their hearts who lives inseparably with the soul just as the warmth of sun constantly maintains its invisible effect, and the ignorants who have not purified their inner-self i.e. who do not perform acts of bhakti in accordance with the injunctions of the scriptures, even though endeavouring, do not see this.

Chapter 15 Verse 13: And I only, entering the Earth sustain the living beings under me by power, and becoming the sapful i.e. nectar-filled moon, nourish all the medicinal herbs i.e. vegetation.

Chapter 15 Verse 14: I only, dwelling in the bodies of the living beings under me, becoming the fire of digestion by combining with the incoming and out-going breath, digest the food in four ways.

Chapter 15 Verse 16: In this world, there are two types of Gods, Perishable and Imperishable. Likewise, in these two loks, the bodies of all the living beings are said to be perishable and the soul, imperishable.

Chapter 15 Verse 17: The Supreme God is, however, someone else other than the two aforesaid Gods, Kshar Purush and Akshar Purush, who by entering the three loks, sustains everyone and is called as the Eternal Parmeshwar Parmatma (Immortal Supreme God).

Chapter 15 Verse 18: Because I am greater than the perishable material body in every respect and am also superior to the imperishable soul, and therefore, in Lok Ved i.e. based on hearsay knowledge in Vedas, am famous as Supreme God.

Chapter 15 Verse 19: O Bharat! A knowledgeable person who because of not finding a Tatvdarshi saint knows me in this way as Purushottam/Supreme God, he only worships me in every way considering me everything.

Chapter 15 Verse 20: O Sinless Arjun! Thus, this most confidential mysterious scripture has been narrated by me and by knowing this in essence, a knowledgeable person becomes blessed; which means, on finding a Complete Saint who is a Tatvdarshi saint and obtaining updesh (spiritual instruction), escapes form Kaal’s trap.